At the turn of the nineteenth century, American trade with the Mediterranean countries was being shut down by the extremists who controlled the “Barbary Coast” states along the north shore of Africa. Ship after ship was taken hostage and hundreds of sailors sold into slavery unless ransom was paid. Tripoli’s envoy, Sidi Haji Abdrahaman was blunt when he explained his country’s position: 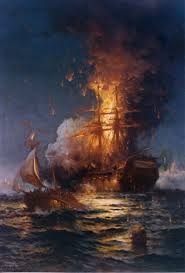 “It was written in the Koran, that all nations which had not acknowledged the Prophet were sinners, whom it was the right and duty of the faithful to plunder and enslave; and that every mussulman who was slain in this warfare was sure to go to paradise.”

In March 1801, Thomas Jefferson, just elected as President, ordered a squadron of the nascent United States Navy to cruise the region, and the United States frigate Philadelphia (sister ship to the USS Constitution) set out to blockade Tripoli’s harbor.

On October 31, 1803, a number of Barbary corsairs approached the Philadelphia, annoying her purposely, and lured the frigate across an uncharted reef where she ran aground. Captain William Bainbridge tried to refloat her, casting off all of her guns in order to make her lighter. He tried to dump all other unnecessary equipment off the ship, and then he ordered the foremast sawed off in one last desperate attempt to lighten her. All of these attempts failed.

Under withering fire from shore batteries and Tripolitan gunboats, Bainbridge was forced to surrender the ship.

Pasha Yussef Karamanli demanded that the United States pay a $2 million ransom which was more than the young country’s treasury could possibly afford, and the Philadelphia was too great a prize to be allowed to remain in enemy hands. The Americans couldn’t risk the possibility that the frigate could be converted it into a Barbary warship. The call went out for volunteers for a carefully planned raid.

On the evening of February 16, 1804 Lieutenant Stephen Decatur, Jr. stood on the deck of the ketch Intrepid with a Sicilian pilot as it approached Tripoli harbor. His clothing made him out to be a Mediterranean sailor and the ketch had been rigged to look like a local trading vessel in distress. Navigating by moonlight, they sailed into the harbor. Claiming to have lost his anchors in a storm, he requested permission to tie up alongside the Philadelphia. The guards to the Philadelphia had been lulled into complacency and had no idea that an elite raiding force hid below the Intrepid’s deck.

As soon as the vessels rafted together, Decatur’s men swarmed from below decks and onto the captured frigate.  The overwhelmed guards jumped overboard and swam ashore, while the Americans rapidly torched their prize. Less than twenty minutes later the Philadelphia was blazing brightly. Casting off just ahead of the flames, the Intrepid’s men rowed out of the now well-lighted harbor, pursued by gunfire.

According to Horatio Nelson, it was “the most bold and daring act of the age.”