In 1872 Henry Wood Elliott, a young artist-naturalist, travelled to Alaska’s Pribilof Islands on behalf of the Treasury Department to study the fur seals and to oversee the fur seal harvest. Since the United States government received significant royalties from the trade in seal skins, Elliot’s objective was to determine the most profitable manner of managing the Pribilof Island seal herds to maintain a sustainable harvest. 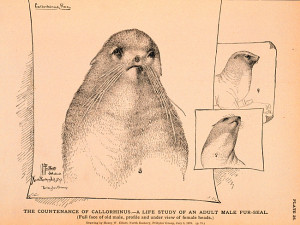 Elliott estimated four million seals lived around the islands, and he concluded from his studies that 100,000 bachelor males per year could be harvested without undermining sustainability. The United States had leased harvesting rights to the Alaska Commercial Company and declared the open waters of the eastern Bering Sea off-limits to sealers from any nation. Rather than protecting the seals, these actions led to offshore, open water sealing by other nations.

The most valuable commercial pelts came from three-year-old bachelor seals. However, in the rush for profit, the harvests started taking females and immature males as well. Shooting females was particularly destructive as three seals were effectively killed–the female, a nursing pup ashore in the rookeries, and a seal embryo.

Elliott returned several times to the Pribilofs and became outraged at the government officials and commercial interests who were allowing the seal herds to be decimated. As a result, he became an untiring advocate of the fur seal. In 1905 he partnered with Secretary of State John Hay to draft a treaty for managing the seal herds. Unfortunately, Hay died and it was not until July 1911 when the four nations most active in sealing – Russia, Japan, Great Britain, and the U.S. – were sufficiently shocked and revolted by the slaughter to sign a treaty outlawing open water sealing and accept on-shore management of the herds.

The Fur Seal Treaty of 1911 was the first international treaty to address the issue of wildlife conservation and represented “a major victory for the conservation of natural resources, a signal triumph of diplomacy…, and a landmark in the history of international cooperation.”