“You ought to be able to think of something to get us up these hills. Each of us is spending $40 apiece to enjoy a weekend in Vermont, yet the most we can do in a day is to climb a hill half-a-dozen times. We want to get in all the skiing we can on these weekends. We want to be carried uphill.” 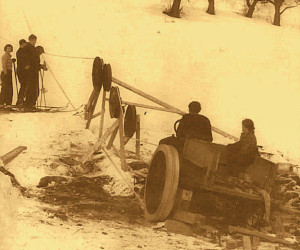 Tom Gammack had spent most of a day with two friends, Doug Burden, (who would later develop Florida’s Marineland) and Barklie Henry, climbing the slopes of Clint Gilbert’s Hill in Woodstock to enjoy a few brilliant moments skiing down to the bottom.

After their day on the slope the three men, all businessmen from New York City, sat at the White Cupboard Inn, chatting with innkeepers Elizabeth and Robert Royce along with “Bunny” Bertram, the former captain of the Dartmouth ski team, who had given them a bit of instruction.

They all had some aches from the day’s activity and good-naturedly started badgering Elizabeth about easing their uphill trek. Gammack was intrigued by Burden’s report of a rope tow he had seen in Canada that was powered by an old automobile. As the conversation heated up, Bunny asked Mr. Royce if he had a Sears or a Montgomery Ward catalogue so that he could estimate the cost of the rope for such a pull.

According to Bunny, Mr. Royce asked Bunny what he wanted the rope for, and when he deduced what Bunny was planning, made certain to rent the hill before Bunny got to it, paying Gilbert ten dollars for the season.

The ski tow cost $500 altogether, $300 coming from the three New York businessmen who each invested $100. It ran up a 900-foot incline, hoisting skiers with 1800 feet of rope that circled through pulleys that were attached to a tree at the top and to the drivewheel of a Model T Ford at the bottom of the hill.

They soon announced the grand opening of the “White Cupboard Skiway” and celebrated with a parade through town featuring a band, the Woodstock Fire Department, and “the big red Maxim truck.”

The first to ascend the lift on January 28, 1934, were three local boys – Bobby Bourdon, Lloyd Brownell, and Buster Johnson. In order to use the tow, they had to grab onto the rope and hold on for dear life as the rope sped them to the top. They soon learned to approach the rope carefully, grabbing with both hands, “one hand in front of the other, bending their knees and pitching their center of gravity back over their heels.” If they felt the ride was slow they would yell “Step on the gas!” and the operator in the truck would floor it.

As the rope pulled, it twisted, wringing and often stealing gloves from skiers as they reached the top. If a skier wasn’t careful, they could get hung by their own scarf.

One woman was unlucky enough to have a thread of her heavy knit sweater catch in the twisting rope. It began to unravel as the rope hauled her to the top and, as it was spring and she had gone to the slopes with nothing but the sweater to cover her top, she arrived at the top of the hill completely bare-chested.

Bobby Bourdon quickly presented her with his ski jacket. 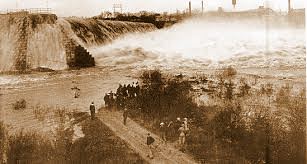 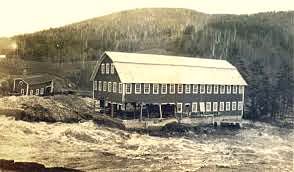 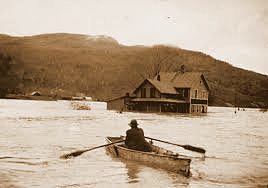