Summer began with its usual promise. By the fifth of June the thermometer had risen to the high eighties, and the beans and corn were sprouting up out of the ground. In the afternoon, however, large clouds started forming to the west, and thunder started rolling, and lightning lit up the darkening skies. The wind rushed in, and the temperatures dropped like a rock as a Canadian cold front invaded New England. 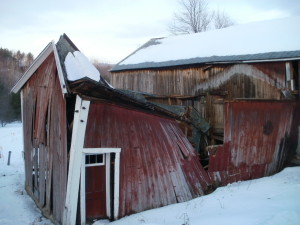 By the morning of June sixth, the temperatures were in the forties, and snow had started to fall. Flurries fell in Salem and Boston – in Danville Vermont the snow drifted a foot and a half deep. The snow and the cold and the wind lingered for five days, until it finally started warming up again.

By the middle of June temperatures were getting back to normal, and the farmers were able to plant a second crop of corn and beans. By the twenty-third, a heat wave had hit and the mercury in the towns around Boston hit ninety-nine degrees.

July was very dry and drought began to affect the harvests. On July eighth, the weather turned again and New Englanders shivered through one of the coldest nights of the summer as a ground frost covered the Upper Connecticut Valley.

The first half of August was normal, but still dry. Another cold front came through on the 20th and brought on more frosty nights and reports of snow in the mountains. The dry, cool conditions of late August persisted through September which ended with a series of crop killing frosts.
Many farmers were ruined in “The Year without a Summer” which meteorologists blame on the immense eruption of the Tamboro volcano east of Java in April 1815. The New Englanders pulled up roots and headed west to settle the Genesee country of western New York, and on into Ohio and the Midwest, where they hoped to find a more hospitable climate, richer soil, and a better life.