As soon as “Jackie” Mitchell learned to walk, she started accompanying her father to the baseball diamond. She learned the sandlot basics from him, and learned to pitch from her next-door neighbor, a minor leaguer named Dazzy Vance.Dazzy (who would later play for the Brooklyn Dodgers) taught her how to throw his… “drop pitch” which would come in chest high . . . then drop, right before it reached the plate.

When Jackie was sixteen years old, she played for a women’s team in Chattanooga and her strong left arm attracted the attention of Joe Engel, the president and owner of the Chattanooga Lookouts. Engel was the “Barnum of Baseball,” who was known for his zany promotional stunts. He once traded his shortstop for a 25-pound turkey, and then invited sportswriters to his house to eat the turkey for dinner. He offered Jackie a contract to play for the Lookouts.

On March 28, 1931, Jackie signed the contract. At that moment, she became an official member of the Chattanooga Lookouts, a Class AA minor league team.

Meanwhile, the New York Yankees had finished spring training in Florida and were on their way north. As in previous years, they stopped in Chattanooga to play the Lookouts. An exhibition game was scheduled for April Fool’s Day, but rain delayed the game until April 2.

The veteran right-hander Clyde Barfoot started the game for the Lookouts, but surrendered hits to the Yankees’ first two batters. Engel called for his seventeen year-old lefty lady, Jackie Mitchell, to face the heart of “Murderers’ Row,” Babe Ruth and Lou Gehrig.

Babe Ruth smirked as he faced the young lady, and her first sinker darted low for ball one. Jackie followed with another sinker on the outside corner, and this time the Babe swung and missed. Grinning, the “Sultan of Swat” ripped at the next offering and missed again – strike two! The next pitch was another sinker on the corner of the plate, which Ruth placidly watched sail by for a called strike three. At that point the Babe “kicked the dirt”, “gave his bat a wild heave” and stormed unhappily to the dugout.

“After I threw the second strike, I settled down a little. I figured then that it wasn’t going to be so hard for me to get the ball over the plate,” Mitchell said later in an interview.

Next up was the “Iron Horse”, Lou Gehrig, who promptly missed three straight drop pitches, swinging early each time.

On seven pitches, Mitchell had succeeded in striking out two of baseball’s greatest sluggers. The Chattanooga crowd responded with a standing ovation. The next day, the local newspaper speculated that “maybe her curves were too much for them.”

Unfortunately for Jackie Mitchell, her game against the Yankees turned out to be her last game with the Lookouts. Commissioner Kenesaw Mountain Landis voided her contract shortly thereafter and declared that baseball was too strenuous for women.

The tree sparrows, hyemalis, and song sparrows are particularly lively and musical in the yard this rainy and truly April day. The air rings with them. The robin now begins to sing sweet powerfully.

April has begun like itself. It is warm and showery, while I sail away with a light southwest wind toward the Rock. Sometimes the sun seems just ready to burst out, yet I know it will not. The meadow is becoming bare. It resounds with the sprayey notes of blackbirds. The birds sing this warm, showery day after a fortnight’s cold (yesterday was wet too), with a universal burst and flood of melody. Great flocks of hyemalis, etc., pass overhead like schools of fishes in the water, many abreast. 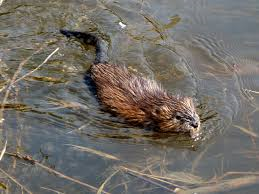 The white maple stamens are beginning to peep out from the wet and weather beater buds. The earliest alders are just ready to bloom – to show their yellow – on the first decidedly warm and sunny day. The water is smooth at last and dark. Ice no longer forms on the oars. It is pleasant to paddle under the dripping hemlocks this dark day. They make more of a wilderness impression than pines.

The lines of sawdust from Barrett’s mill at different heights on the steep, wet bank under the hemlocks rather enhance the impression of freshness and wildness, as if it were a new country. Saw a painted tortoise on the bottom. The bark of poplar boughs which have been held in the ice along the sides of the river the past winter is gnawed, probably by muskrats, Saw floating a good sized rooster without a head, – the red stump sticking out, – probably killed by an owl. Heard a bird whose note was very much like that of the purple finch, – loud and clear.

First smelled the muskrat. Yesterday and to-day I hear the cackle of the flicker, so agreeable from association. It brings the year about.