“Yesterday, the greatest question was decided, which ever was debated in America, and a greater, perhaps, never was nor will be decided among men. A resolution was passed without one dissenting colony, “that these United Colonies 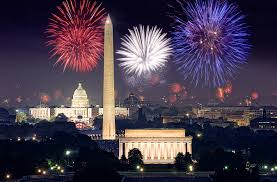 are, and of right ought to be, free and independent States, and as such they have, and of right ought to have, full power to make war, conclude peace, establish commerce, and to do all other acts and things which other States may rightfully do.” You will see in a few days a Declaration setting forth the causes which have impelled us to this mighty revolution, and the reasons which will justify it in the sight of God and man. . .

The Second Day of July 1776, will be the most memorable Epocha, in the History of America.

I am apt to believe that it will be celebrated, by succeeding Generations, as the great anniversary Festival. It ought to be commemorated, as the Day of Deliverance by solemn Acts of Devotion to God Almighty. It ought to be solemnized with Pomp and Parade, with Shews, Games, Sports, Guns, Bells, Bonfires and Illuminations from one End of this Continent to the other from this Time forward forever more.

You will think me transported with Enthusiasm but I am not. — I am well aware of the Toil and Blood and Treasure, that it will cost Us to maintain this Declaration, and support and defend these States. — Yet through all the Gloom I can see the Rays of ravishing Light and Glory. I can see that the End is more than worth all the Means. And that Posterity will triumph in that Days Transaction… “

James A. Garfield was absolutely brilliant. The last “Log Cabin President,” he worked his way through his first year at Hiram College as a janitor and a carpenter – by his second year he was supporting himself as assistant professor of 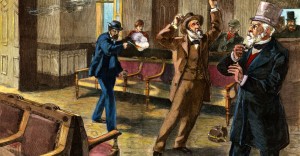 literature and ancient languages. He then transferred to Williams College and graduated in 1856 as class salutatorian. At age 26 he was back at Hiram College in Ohio – as president.

A Civil War hero and nine-term Congressman, Garfield was reluctantly drafted by fellow Republicans to run for president of the United States. When he reached the White House he found himself under siege from the spoils system under which anyone could petition the president in person for a government job.

Charles Guiteau was one of the many office seekers who visited the White House every day. He was a man who had tried practicing law, he tried preaching evangelism, he had even tried free love – but the women in his free love commune nicknamed him “Charles Get Out.”

Now he was operating under the delusion that he would be named the next minister to France. Day after day Guiteau visited the White House, once even meeting face to face with Garfield, but his grand expectations again seemed to evaporate . . .

On the morning of July 2, 1881, President Garfield set out to travel by train from Washington to Massachusetts. When the president, accompanied by two of his sons, walked into the Sixth Street Station, Guiteau stepped out of the shadows and shot him twice at close range – once in the arm and once in the back.

“My God, what is this?” Garfield exclaimed.

The shot lodged behind the president’s pancreas but thankfully did not hit any vital organs. Within minutes, twelve doctors converged on the wounded president lying on the station floor, and poked and prodded the holes in his body with their unsterilized fingers probing for the bullet.

Robert Todd Lincoln, a cabinet member at the time and travelling with the president, summoned Dr. D. Willard Bliss who immediately took charge. For the ensuing 80 days, Garfield condition worsened as infection spread through his body. Unable to keep down food, the president’s weight plunged from 210 pounds to 130.

He was fed oatmeal (which he detested) and milk from a cow on the White House lawn. When told that Indian chief Sitting Bull, a prisoner of the army, was starving, the suffering Garfield said, “Let him starve”, then, “Oh no, send him my oatmeal!”

Unfortunately the bullet had gone to the left, and as Garfield was lying on a bed made of metal springs, the metal detector wasn’t much help.

President Garfield finally died in great pain on September 19, 1881. Charles Guiteau would be hanged on June 30, 1882, but before he died he fully admitted his guilt:

“Yes, I shot him, but his doctors killed him.”

In the fall of 1915, Mamie Doud arrived in San Antonio, Texas to spend a warm winter with her wealthy parents away from Denver’s snow and cold. Mamie was eighteen years old and had just finished up at Miss Wolcott’s finishing 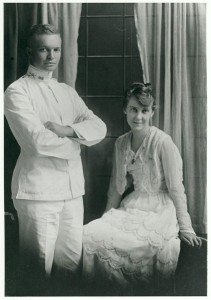 One afternoon in October, Mamie was invited to a party at the house of her friend Lulu Harris, who was the wife of an officer at Fort Sam Houston. When Mamie arrived, she mingled for a while  with the other guests on the lawn until she realized that a young second lieutenant who had just arrived was staring intently at her.

Mamie thought to herself that this was just about the handsomest man she had ever seen and stared right back. Within moments she found herself introduced to the young officer with freshly pressed uniform and polished boots.

Mamie was “a vivacious and attractive girl, smaller than average, saucy in the look about her face and in her whole attitude.” Ikey was a dashing West Point graduate who had just turned twenty-five.

He invited her to walk with him for an inspection tour of the fort’s guard posts. She didn’t think twice and they set off, laughing and chatting as they toured the post.

The next day Ikey called and asked Mamie to go dancing, but she already had a date. He called again, and again.

When she returned from dates her other beaus would find Dwight Eisenhower waiting on her parent’s porch. Four months later, on St. Valentine’s Day 1916, Dwight gave Mamie a miniature of his West Point class ring, and they were formally engaged.

Mamie’s parents liked the young officer, but Mamie had just turned nineteen and was used to a comfortable life in a big house with plenty of servants and they worried about how she would adapt to the transient life of an army wife.

Mamie didn’t care, and she didn’t care about a large society wedding with a formal gown either.

Following the wedding the newlyweds honeymooned a few days in Eldorado Springs, and then visited the groom’s parents in Abilene.

Then they settled into the lieutenant’s living quarters at Fort Sam Houston, the first of countless temporary homes which they would share.