The Pilgrims had made it, for the most part, through the winter. March 16th dawned a fair, warm day. The new settlers considered some military exercises, but were interrupted when they noticed some “savages” (as they called their new neighbors) observing them from a distance.

They got busy arranging their defenses, when one of the “savages” boldly walked right up to their settlement. He was a 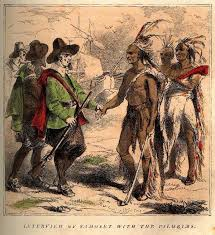 tall straight man, with long black hair, and was stark naked, with only a leather fringe hanging about his waist and carried a bow and two arrows. He boldly strode alone along the houses and seemed ready to walk right into the settlement before the settlers stopped him.

The “savage” greeted the new immigrants in English, and welcomed them and introduced himself as Samoset. He explained that he had learned to speak their language from the Englishmen that came to fish at Monchiggon (Monhegan Island), and he knew most of the captains, commanders, and masters that visited that place by name.

The Pilgrims questioned Samoset intensely, as he was the first savage they had actually met. He said he was not originally from the South Shore, but had been visiting the region for about eight months. He was originally one of the “sagamores” or lords of Morattiggon, which was a day’s sail with a great wind (or five days by land) distant.

Samoset talked at length about the whole country and of every province and of their sagamores and their men and their strength. When the wind kicked up the Pilgrims cast a horseman’s coat about him. He asked some beer, but the pilgrims gave him strong water and biscuit and butter, and cheese, and pudding, and a piece of mallard, all which he liked well, and had eaten previously with his English acquaintances.

He told the Pilgrims that the place where they were now living which they called Plymouth was actually called Patuxet, and that about four years prior all its inhabitants had died in a plague, which was why it was vacant and no-one else currently laid claim to it.

The Pilgrims talked with their visitor all afternoon, until the visit became tiresome. They would gladly have been rid of him at night, but he wasn’t ready to leave. They tried to have him sleep on the boat, but it was too windy, so he slept at Stephen Hopkins’ house, where they kept a close eye on him.

The next day Samoset went back to the Massasoits, who were the Pilgrims’ nearest neighbors. Apparently these people didn’t trust the English, as some years back a master of a ship named Hunt had started trading with them, and then had seized twenty men from Patuxet and seven men from Nauset, and carried them off and sold them for slaves for twenty pound a man.

The settlers gave Samoset a knife, a bracelet, and a ring; he promised come back in a night or two and to bring with him some of the Massasoits, and they would bring beavers’ skins which they could trade.