Nat Herreshoff was born and bred on the eastern shore of Narragansett Bay. He showed mechanical aptitude from an early age and graduated in three years from the Massachusetts Institute of Technology with a degree in mechanical engineering. After graduation he took a position with the Corliss Steam Engine Company in Providence and was delegated to oversee the 40-foot tall, 1400-horsepower dynamo which the company built to power demonstration machinery at the 1876 Centennial Exposition in Philadelphia. 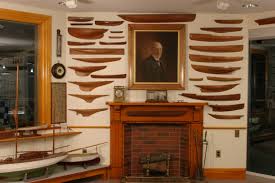 After the exposition closed Nat returned to Rhode Island and formed the Herreshoff Manufacturing Company in Bristol with his older brother, John Brown Herreshoff, and started to build boats. Nat provided the engineering expertise, while his brother J.B., who had gone blind at the age of 14, did all the cost calculations in his head, was responsible for negotiating with the firm’s clientele, and managed the business.

The Herreshoff boat works quickly became renowned for building the fastest and finest steam yachts ever, in a wide variety of hull shapes. They paid their skilled craftsmen the highest wages in the state and the business burgeoned from about twenty employees to over 400. 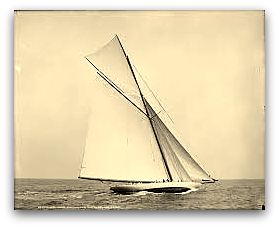 Nat Herreshoff was always tinkering and experimenting with new materials and inventive concepts and designs, seeking to create the fastest and finest boats in the world. Henry Ford is said to have visited the company’s works before he set up his first automobile plant and was particularly impressed with Herreshoff’s innovative use of interchangeable parts.

In 1888 Herreshoff was supervising speed trials of a 138-foot, 875 horsepower steamboat named “Say When”. After a safety valve released to relieve excess pressure, Herreshoff shut it back off so the boat could achieve maximum speed. A boiler exploded and fatally injuring a member of the crew, and Herreshoff lost his steam engineer’s license.

The range of boats designed by Captain Nat Herreshoff was vast and eclectic. The “New York 30” is widely considered among the finest racer/cruiser one-designs ever created. The 144-foot America’s Cup behemoth Reliance, which had a sail area of 16,000 square feet, could not have sailed from Bristol today as its mast would stand higher than the Newport Bridge.

Perhaps his best loved boat was the simple “12½”, which many consider the best small boat design ever. Designed for the children of yachtsmen to learn how to sail, the boat is buoyant and stable, with a ballasted keel. The jib can be reached from the cockpit, the rig is small enough so a child can sail the boat, but it is still powerful enough that any sailor can enjoy its performance in the choppy waters of Narragansett Bay.

Captain Nat Herreshoff was one of the few people ever made an honorary member of the New York Yacht Club; his name is listed
immediately before England’s King George V and the Prince of Wales.

The Herreshoff Marine Museum in Bristol RI, which occupies the site of the old Herreshoff Manufacturing Co., preserves Captain Nat’s legacy to this day.