The 1920s had not been kind to Las Vegas. It wasn’t much of a town to begin with, and the region’s mines weren’t producing much after the federal government halted silver subsidies and after the demand for zinc and tungsten plummeted with the end of the Great War. A railroad strike in 1922 prompted the Union Pacific to pull out its repair shops and there wasn’t much left.

Las Vegas was so isolated that there didn’t seem to be any possibility it would grow. The depression was already setting in before the 1929 stock market crash. In 1930, with a population of 5,165, Las Vegas didn’t even have a traffic light, and the state assembly was desperate for new sources of revenue.

Phil Tobin, was a state assemblyman back then. “I was just plumb sick and tired of seeing gambling going on all over 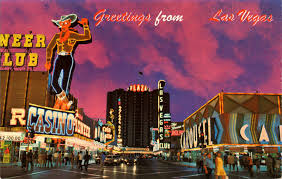 the state and the payoffs being made everywhere,” he told the Reno Journal-Gazette years later. “Some of those tinhorn cops were collecting 50 bucks a month for allowing it. Also, the damn state was broke and we needed the money.”

On March 19, 1931, Gov. Fred Balzar signed legislation that legalized all forms of casino gambling and simultaneously enacted the most liberal divorce laws in the country.

In short order the Northern Club opened in Las Vegas, and was soon followed by Binion’s Horseshoe, the California Hotel & Casino, the Fremont Hotel & Casino and the Main Street Casino.
Reno, being an easy drive from San Francisco, became the national center for high-society divorces. “Bugsy” Siegel, who launched the Vegas Strip when he opened the Flamingo in 1946, was one of the first to benefit from the new laws when he was divorced there by his wife, Esther. By 1939 Hollywood had discovered the benefits of a six week residence in Nevada when Clark Gable came to Las Vegas to end his marriage to Maria Franklin.

By the early 50’s the Sands Hotel had opened, the Rat Pack was in town, and neon lights lit up the strip until dawn.