Exactly a week after Fitzgerald’s debut novel, This Side of Paradise, was published — the two exchanged wedding vows at New York’s St. Patrick’s Cathedral. Zelda’s letter to Scott written in late summer of 1930 tells what happened next:

“We moved to 59th Street. We quarrelled and you broke the bathroom door and hurt my eye. We went so much to the theatre that you took it off the income tax. We trailed through Central Park in the snow after a ball at the Plaza, I 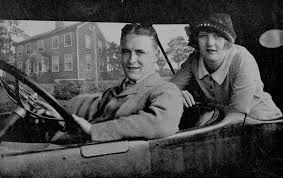 quarrelled with Zoë about Bottecelli at the Brevoort and went with her to buy a coat for David Belasco. We had Bourbon and Deviled Ham and Christmas at the Overmans and ate lots at the Lafayette. There was Tom Smith and his wall-paper and Mencken and our Valentine party and the time I danced all night with Alex and meals at Mollats with John and I skated, and was pregnant and you wrote the “Beautiful and Damned.” We came to Europe and I was sick and complained always. There was London, and Wopping with Shane Leslie and strawberries as big as tomatoes at Lady Randolph Churchills. There was St. Johns Ervines wooden leg and Bob Handley in the gloom of the Cecil — There was Paris and the heat and the ice-cream that did not melt and buying clothes — and Rome and your friends from the British Embassy and your drinking, drinking. We came home. There was “Dog” and lunch at the St. Regis with Townsend and Alex and John: Alabama and the unbearable heat and our almost buying a house. Then we went to St. Paul and hundreds of people came to call. There were the Indian forests and the moon on the sleeping porch and I was heavy and afraid of the storms. Then Scottie was born and we went to all the Christmas parties and a man asked Sandy “who is your fat friend?” Snow covered everything. We had the Flu and went lots to the Kalmans and Scottie grew strong. Joseph Hergesheimer came and Saturdays we went to the university Club. We went to the Yacht Club and we both had minor flirtatons. Joe began to dislike me, and I played so much golf that I had Tetena. Kollie almost died. We both adored him. We came to New York and rented a house when we were tight. There was Val Engelicheff and Ted Paramour and dinner with Bunny in Washington Square and pills and Doctor Lackin And we had a violent quarrell on the train going back, I don’t remember why. Then I brought Scottie to New York. She was round and funny in a pink coat and bonnet and you met us at the station. In Great Neck there was always disorder and quarrels: about the Golf Club, about the Foxes, about Peggy Weber, about Helen Buck, about everything. We went to the Rumseys, and that awful night at the Mackeys when Ring sat in the cloak-room. We saw Esther and Glen Hunter and Gilbert Seldes. We gave lots of parties: the biggest one for Rebecca West. We drank Bass Pale Ale and went always to the Bucks or the Lardners or the Swopes when they weren’t at our house. We saw lots of Sydney Howard and fought the week-end that Bill Motter was with us. We drank always and finally came to France because there were always too many people in the house. On the boat there was almost a scandal about Bunny Burgess. We found Nanny and went to Hyeres — Scottie and I were both sick there in the dusty garden full of Spanish Bayonet and Bourgainvilla. We went to St. Raphael. You wrote, and we went sometimes to Nice or Monte Carlo. We were alone, and gave big parties for the French aviators. Then there was Josen and you were justifiably angry. We went to Rome. We ate at the Castelli dei Cesari.

“The sheets were always damp. There was Christmas in the echoes, and eternal walks. We cried when we saw the Pope. There were the luminous shadows of the Pinco and the officer’s shining boots. We went to Frascati and Tivoli. There was the jail, and Hal Rhodes at the Hotel de Russie and my not wanting to go to the moving-picture ball at the Excelsior and asking Hungary Cox to take me home. Then I was horribly sick, from trying to have a baby and you didn’t care much and when I was well we came back to Paris. We sat together in Marseilles and thought how good France was. We lived in the rue Tilsitt, in red plush and Teddy came for tea and we went to the markets with the Murphies. There were the Wimans and Mary Hay and Eva La Galliene and rides in the Bois at dawn and the night we all played puss-in-the-corner at the Ritz. There was Tunti and nights in Mont Matre. We went to Antibes, and I was sick always and took too much Dial. The Murphy’s were at the Hotel du Cap and we saw them constantly. Back in Paris I began dancing lessons because I had nothing to do. I was sick again at Christmas when the Mac Leishes came and Doctor Gros said there was no use trying to save my ovaries. I was always sick and having picqures and things and you were naturally more and more away. You found Ernest and the Cafe des Lilas and you were unhappy when Dr. Gros sent me to Salies-de Beam. At the Villa Paquita I was always sick. “