Robert Hunter was the governor of New York and New Jersey from 1710 to 1719. In a letter to the Lords of Trade in London he described what happened on April 6th:

I must now give your Lordships an account of a bloody conspiracy of some of the slaves of this place, to destroy as many of the inhabitants as they could. 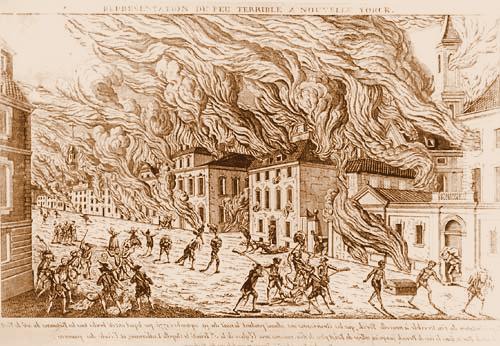 It was put in execution in this manner, when they had resolved to revenge themselves, for some hard usage they apprehended to have received from their masters (for I can find no other cause) they agreed to meet in the orchard of Mr. Crook in the middle of the town, some provided with fire arms, some with swords and others with knives and hatchets.  This was the sixth day of April, the time of meeting was about twelve or one clock in the night, when about three and twenty of them were got together.

One…slave to one Vantiburgh set fire to a shed of his masters, and they repairing to his place where the rest were, they all sallied out together with their arms and marched to the fire.  By this time, the noise of the fire spreading through the town, the people began to flock to it.  Upon the approach of several, the slaves fired and killed them.  The noise of the guns gave the alarm, and some escaping, their shot soon published the cause of the fire, which was the reason that not above nine Christians were killed, and about five or six wounded.

Upon the first notice, which was very soon after the mischief was begun, I order’d a detachment from the fort under a proper officer to march against them, but the slaves made their retreat into the woods, by the favour of the night. Having ordered sentries the next day in the most proper place on the Island [Manhattan] to prevent their escape, I caused the day following, the militia of this town and of the country of West Chester to drive to the Island, and by this means and strict searches tin the town, we found all that put the design in execution, six of these having first laid violent hands upon themselves [committed suicide], the rest were forthwith brought to their trial before ye Justices of this place, who are authorized by Act of the Assembly to hold a court in such cases.

In that court were twenty seven condemned, whereof twenty one were executed, one being a woman with child, here execution by that means suspended.  Some were burnt, others handed, one broke on the wheel, and one hung alive in chains in the town, so that there has been the most exemplary punishment inflicted that could be possibly thought of.