We entered, and found General Grant sitting at a marble-topped table in the center of the room, and Lee sitting beside a small oval table near the front window, in the corner opposite to the door by which we entered, and facing General Grant. We walked in softly and ranged ourselves quietly about the sides of the room, very much as people enter a sick-chamber when they expect to find the patient dangerously ill.

The contrast between the two commanders was striking, and could not fail to attract marked attention they sat ten feet 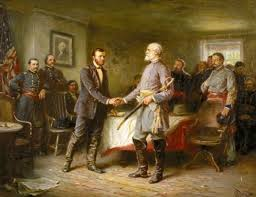 apart facing each other. General Grant, then nearly forty-three years of age, was five feet eight inches in height, with shoulders slightly stooped. His hair and full beard were a nut-brown, without a trace of gray in them. He had on a single-breasted blouse, made of dark-blue flannel, unbuttoned in front, and showing a waistcoat underneath. He wore an ordinary pair of top-boots, with his trousers inside, and was without spurs. The boots and portions of his clothes were spattered with mud. He had no sword, and a pair of shoulder-straps was all there was about him to designate his rank. In fact, aside from these, his uniform was that of a private soldier.

Lee, on the other hand, was fully six feet in height, and quite erect for one of his age, for he was Grant’s senior by sixteen years. His hair and full beard were silver-gray, and quite thick, except that the hair had become a little thin in the front. He wore a new uniform of Confederate gray, buttoned up to the throat, and at his side he carried a long sword of exceedingly fine workmanship, the hilt studded with jewels. His top-boots were comparatively new, and seemed to have on them some ornamental stitching of red silk. Like his uniform, they were singularly clean, and but little travel-stained. On the boots were handsome spurs, with large rowels. A felt hat, which in color matched pretty closely that of his uniform, and a pair of long buckskin gauntlets lay beside him on the table.

General Grant began the conversation by saying ‘I met you once before, General Lee, while we were serving in Mexico, when you came over from General Scott’s headquarters to visit Garland’s brigade, to which I then belonged. I have always remembered your appearance, and I think I should have recognized you anywhere.’
‘Yes,’ replied General Lee, ‘I know I met you on that occasion, and I have often thought of it and tried to recollect how you looked, but I have never been able to recall a single feature.'”

The two generals talked a bit more and then Lee asked Grant to commit the terms to paper:

“‘Very well,’ replied General Grant, ‘I will write them out.’

Grant handed the document to Lee. After reviewing it, Lee informed Grant that the Cavalry men in the Confederate Army owned their horses and asked that they keep them. Grant agreed and Lee wrote a letter formally accepting the surrender.

“At a little before 4 o’clock General Lee shook hands with General Grant, bowed to the other officers, and with Colonel Marshall left the room. One after another we followed, and passed out to the porch. Lee signaled to his orderly to bring up his horse, and while the animal was being bridled the general stood on the lowest step and gazed sadly in the direction of the valley beyond where his army lay – now an army of prisoners. He smote his hands together a number of times in an absent sort of way; seemed not to see the group of Union officers in the yard who rose respectfully at his approach, and appeared unconscious of everything about him. All appreciated the sadness that overwhelmed him, and he had the personal sympathy of every one who beheld him at this supreme moment of trial. The approach of his horse seemed to recall him from his reverie, and he at once mounted.

General Grant now stepped down from the porch, and, moving toward him, saluted him by raising his hat. He was followed in this act of courtesy by all our officers present; Lee raised his hat respectfully, and rode off to break the sad news to the brave fellows whom he had so long commanded.”