Henry James recalled his childhood in “A Small Boy and Others”, written when he turned seventy: 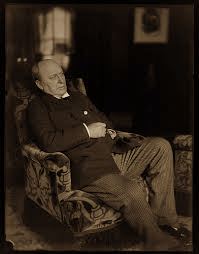 To look back at all is to meet the apparitional and to find in its ghostly face the silent stare of an appeal. When I fix it, the hovering shade, whether of person or place, it fixes me back and seems the less lost—not to my consciousness, for that is nothing, but to its own—by my stopping however idly for it. The day of the daguerreotype, the August afternoon, what was it if not one of the days when we went to Union Square for luncheon and for more ice-cream and more peaches and even more, even most, enjoyment of ease accompanied by stimulation of wonder? It may have been indeed that a visit to Mrs. Cannon rather on that occasion engaged us—memory selects a little confusedly from such a wealth of experience. For the wonder was the experience, and that was everywhere, even if I didn’t so much find it as take it with me, to be sure of not falling short. Mrs. Cannon lurked near Fourth Street—that I abundantly grasp, not more definitely placing her than in what seemed to me a labyrinth of grave bye-streets westwardly “back of” Broadway, yet at no great distance from it, where she must have occupied a house at a corner, since we reached her not by steps that went up to a front door but by others that went slightly down and formed clearly an independent side access, a feature that affected me as rich and strange. What the steps went down to was a spacious room, light and friendly, so that it couldn’t have been compromised by an “area,” which offered the brave mystification, amid other mystifications, of being at once a parlour and a shop, a shop in particular for the relief of gentlemen in want of pocket handkerchiefs, neckties, collars, umbrellas and straw-covered bottles of the essence known in old New York as “Cullone”—with a very long and big O . . .

The interest of the place was that the uncles were somehow always under discussion—as to where they at the moment might be, or as to when they were expected, or above all as to how (the “how” was the great matter and the fine emphasis) they had last appeared and might be conceived as carrying themselves; and that their consumption of neckties and Eau de Cologne was somehow inordinate: I might have been judging it in my innocence as their only consommation. I refer to those sources, I say, the charm of the scene, the finer part of which must yet have been that it didn’t, as it regularly lapsed, dispose of all mystifications. If I didn’t understand, however, the beauty was that Mrs. Cannon understood (that was what she did most of all, even more than hem pocket handkerchiefs and collars) and my father understood, and each understood that the other did, Miss Maggie and Miss Susie being no whit behind. It was only I who didn’t understand—save in so far as I understood that, which was a kind of pale joy; and meanwhile there would be more to come from uncles so attachingly, so almost portentously, discussable. The vision at any rate was to stick by me . . .