On the afternoon of May 22, Charles Sumner was sitting at his desk in the almost empty chamber of the United States Senate, attaching his postal frank to copies of his “Crime Against Kansas” speech which he had delivered two days prior.

Representative Preston Brooks of South Carolina, approached him. “Mr. Sumner, I have read your speech twice over carefully. It is a libel on South Carolina, and Mr. Butler, who is a relative of mine.”

If Preston Brooks had believed Charles Sumner to be a gentleman, he might have challenged him to a duel.  Instead, he 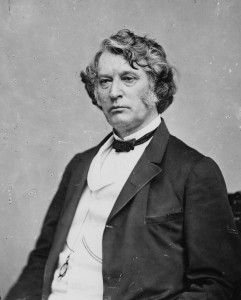 chose a light gutta-percha cane of the type used to discipline unruly dogs.

As Sumner began to stand up, Brooks slammed his metal-topped cane onto the Massachusetts senator’s head. Brooks struck again and again; Sumner pulled himself up and lurched blindly about the chamber, futilely attempting to protect himself. Blinded by his own blood, Sumner staggered up the aisle and collapsed.

Brooks continued beating the motionless Sumner until the cane broke. Bleeding profusely, Sumner was carried away while Brooks walked calmly out of the chamber, without being detained by the stunned onlookers.

Sumner had crossed the line. It wasn’t his abolitionist stance that prompted the assault. It wasn’t just his characterization of Stephen Douglas as a “noise-some, squat, and nameless animal . . . not a proper model for an American senator.” Even more, it was his verbal assault on a man of chivalry, South Carolina senator Andrew Butler, whom he charged with taking “a mistress . . . who, though ugly to others, is always lovely to him; though polluted in the sight of the world, is chaste in his sight—I mean,” added Sumner, “the harlot, Slavery.”

Representative Preston Brooks was Butler’s South Carolina kinsman. He later said that he intended to challenge Sumner to a duel, and consulted with a fellow South Carolina Representative, Laurence M. Keitt, on dueling etiquette. Keitt told him that dueling was for gentlemen of equal social standing, and that Sumner was no better than a drunkard, due to the coarse language he had used during his speech. Since Sumner was no gentleman, it would be more appropriate to beat him with his cane.

Sumner never really recovered from the attack, and he became an increasingly bitter martyr for the abolitionists in the North. An attempt was made to expel Brooks from the House of Representatives, but it failed. He resigned only to be quickly re-elected by his supportive constituency, but he died before he could take office again.

Less than five years later, South Carolina seceded and the shelling of Fort Sumter ushered in the Civil War.