“Behind me stands a wall that encircles the free sectors of this city, part of a vast system of barriers that divides the entire continent of Europe. From the Baltic South, those barriers cut across Germany in a gash of barbed wire, concrete, dog runs, and guard towers. Farther south, there may be no visible, no obvious wall. But there remain armed guards and checkpoints all the same — still a restriction on the right to travel, still an instrument to impose upon ordinary men and women the will of a totalitarian state.

Yet, it is here in Berlin where the wall emerges most clearly; here, cutting across your city, where the news photo 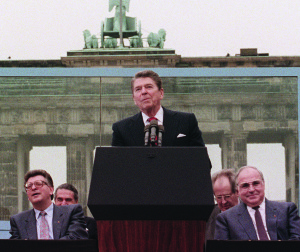 and the television screen have imprinted this brutal division of a continent upon the mind of the world.

Standing before the Brandenburg Gate, every man is a German separated from his fellow men.

But in the West today, we see a free world that has achieved a level of prosperity and well-being unprecedented in all human history. In the Communist world, we see failure, technological backwardness, declining standards of health, even want of the most basic kind — too little food. Even today, the Soviet Union still cannot feed itself. After these four decades, then, there stands before the entire world one great and inescapable conclusion: Freedom leads to prosperity. Freedom replaces the ancient hatreds among the nations with comity and peace. Freedom is the victor.

And now — now the Soviets themselves may, in a limited way, be coming to understand the importance of freedom. We hear much from Moscow about a new policy of reform and openness. Some political prisoners have been released. Certain foreign news broadcasts are no longer being jammed. Some economic enterprises have been permitted to operate with greater freedom from state control.

Are these the beginnings of profound changes in the Soviet state? Or are they token gestures intended to raise false hopes in the West, or to strengthen the Soviet system without changing it? We welcome change and openness; for we believe that freedom and security go together, that the advance of human liberty — the advance of human liberty can only strengthen the cause of world peace.

There is one sign the Soviets can make that would be unmistakable, that would advance dramatically the cause of freedom and peace.