June 15th Fort Wm. We are camped near the Fort, and shall probably remain here several days, as the Co. are to leave their wagons at this post and make arrangements to transport their goods the remainder of the journey, on mules. It is very pleasant to fix my eyes, once more, upon a few buildings, several weeks have passed, since we have seen a building.

June 19th 1836 Fort Wm. Today is the Sabbath, and the first we have spent in quietness and rest, since the 8th of May. 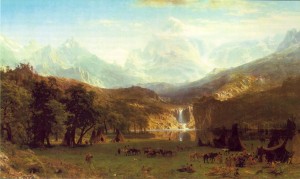 This morning an elderly man (an Englishman) came to our camp, wishing to obtain a testament. Said he had seen but one, for four years-had once indulged a hope that he was a Christian; but for several years had not enjoyed religious privileges – had been associated with ungodly men – neglected religious duties, and now feared he had no interest in the Saviour. I gave him a bible, which he received with great joy and thankfulness.

Mr. S. in compliance with the request of the chief men of this expedition, met with the people under the shade of a few trees near our camp for religious service. A large assembly met, and were very attentive while Mr. S. made a few remarks upon the parable of the prodigal son.

Ft.Wm. June 21st This day we are to leave this post, and have no resting place in view till we reach Rendezvoux 400 miles distant. We are now 2,800 miles from my dear parents dwelling, expecting in a few days to commence ascending the Rocky Mts. Only He who knows all things, knows whether this debilitated frame will survive the undertaking. His will, not mine, be done.

June 25 On the 22nd we left the Platte. Our route since that time has been through a rugged barren region. Today we came to the Platte but do not find those beautiful plains we found before we came into the region of the Mts.

June 26 Sabbath noon. Camped on the Platte, and have the privilege of spending the remainder of this holy day in rest, but not in quiet, for the Co are busy in making preparation to cross on the morrow. They are under the necessity of constructing a boat, as the river is not fordable.

July 4th Crossed a ridge of land, today called the divide, which separates the waters that flow into the Atlantic from those that flow into the Pacific, and camped for the night on the head waters of the Colorado. A number of Nez Perce who have been waiting our arrival at the Rendezvoux several days, on learning we were near came out to meet us, and have camped with us tonight. They appear to be gratified to see us actually on our way to their country. Mr. Spalding Doct W. & Mr G. are to have a talk with the chiefs this evening.

July 6th Arrived at the Rendezvoux this evening. Were met by a large party of Nez Perces men women and children. The women were not satisfied, short of saluting Mrs. W and myself with a kiss. All appear happy to see us. If permitted to reach their country and locate among them, may our labors be blessed to their temporal and spiritual good.