It was a dark and stormy night in Boone County, Iowa, where nineteen year old Kate Shelley lived on her family’s farm near Honey Creek. The rain was pouring down in torrents and the creek was spilling over its banks and carrying away barns and lumber and threatening to sweep away the family cow. 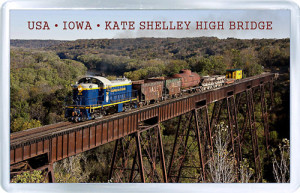 railroad bridge just past the Shelley homestead, and dispatch sent a pusher engine out to check the tracks for damage.

Looking from her window, which in daylight commanded a view of the Honey Creek bridge, Kate Shelley could barely make out through the darkness and storm the approaching locomotive’s headlight. A second after she spied it she heard a tremendous crash and the light vanished; she knew that the bridge had collapsed and that the locomotive had fallen into the abyss.

There was no one at home but her mother and her little brother and sister, and Kate knew an eastbound passenger train was due about midnight and would soon be barreling towards the chasm.

Hastily filling an old lantern and wrapping herself in a waterproof, she sallied out in the storm against her mother’s protests. She climbed up the steep bluff to the track, tearing her clothes to rags and painfully lacerating her flesh on the thick brambles.

When she reached the part of the bridge which still remained Kate crawled out as far as she could, swung her lantern over the dark abyss, and called out at the top of her voice. It was pitch black below but she heard the faint answer of the engineer, who had crawled upon some of the broken timbers.

He called to her to find her way to the station a mile away and to warn the approaching express of the fall of the bridge.

Without hesitation, Kate set out toward the small station at Moingona. She crept along the timbers of the damaged bridge, thirty feet above the roaring current, gingerly stepping from tie to tie. Then she had to cross the Des Moines River bridge, about five hundred feet in length. Just as she tremblingly put her foot on this structure, the wind, rain, thunder and lightning gusted so hard that she lost her balance and her lantern went out. Without her light she could not see a foot ahead of her, except when flashes of lightning revealed the outlines of the bridge and the seething waters beneath.

With no time to lose, Kate threw away the useless lamp, and dropping on her hands and knees, crawled across the high trestle. When she again reached solid ground, she ran to the station, told her story in breathless haste and then fell unconscious.

When she came to, she led a party back to rescue the crew. Edgar Wood, perched in a tree, grasped a rope thrown to him, and came ashore hand-over-hand. Adam Agar couldn’t be reached until the floodwaters began to recede. Pat Donahue’s corpse was eventually found in a cornfield a quarter mile downstream from the bridge, but A.P. Olmsted was never found.

Thanks to Kate’s warning, the express train was successfully stopped at Ogden, and the 200 passengers aboard were saved.