James Swan emigrated from Scotland to Boston in 1765 at the age of 11. He joined the Sons of Liberty at 19, took part in the Boston Tea Party and was wounded during the Battle of Bunker Hill in June 1775.

During the American Revolution, the American colonies had borrowed roughly two million dollars from France. In order to pay this debt, Congress had printed more money and borrowed from foreign governments to meet the deficit. 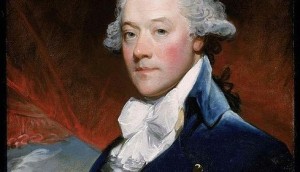 Back then Congress lacked the authority to levy taxes, which would have risked alienating an American public that had just gone to war over unjust taxation.

After the war James Swan became a very successful businessman. By 1795 he was living in Paris, and had become a purchasing agent for France in the United States. On July 9, 1795 he consummated a deal in which he personally took on the entire French debt, meaning that the United States was no longer indebted to any foreign country.

This was a very patriotic act, and a very savvy business move. Swan then resold the debt for a profit to private investors in America and abroad. He returned to America and continued his wheeling and dealing. By the time Napoleon found himself in a cash crunch and agreed to sell Louisiana in 1803, Swan was France’s major creditor.

He then returned to France, but a business partner charged Swan with a debt of 2,000 francs in 1808, which he vehemently denied owing. He was thrown in debtor’s prison in St. Pelegie, where was incarcerated (with servants, cooks, stables and female companionship) for the next two decades. Swan could have walked out the door any day if he paid the debt he owed, which he had funds to do, but it was the principle of the thing…

Twenty years into his imprisonment, King Louis Phillipe began his rule by forgiving all debt. By this time, Swan was 76 and in poor health. He had one last wish – to see his old friend Lafayette one more time.

He visited the old Marquis for a short while – then he went home and passed away.