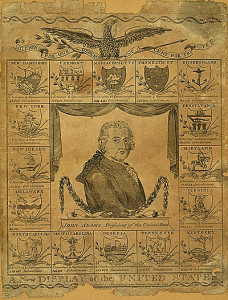 • James Thomson Callender, who wrote a book entitled “The Prospect Before Us” in which he called the Adams administration a “continual tempest of malignant passions” and the President a “repulsive pedant, a gross hypocrite and an unprincipled oppressor” was indicted and convicted in 1800, fined $200 and sentenced to nine months in jail.
• Matthew Lyon, who wrote an essay in the Vermont Journal accusing the administration of “ridiculous pomp, foolish adulation, and selfish avarice” was fined $1,000 and sentenced to four months in jail.
• Benjamin Franklin Bache who accused George Washington of incompetence and financial irregularities, and “the blind, bald, crippled, toothless, querulous Adams” of nepotism and monarchical ambition in his newspaper “The Aurora”. He was arrested in 1798 under the Sedition Act, but he died of yellow fever before trial.
• Anthony Haswell, a printer in Vermont, reprinted parts of the Aurora, including Bache’s claim that the federal government had employed Tories. Haswell was found guilty of seditious libel and sentenced to a two-month imprisonment and a $200 fine.
• David Brown, who had set up a liberty pole in Dedham, Massachusetts with the words, “No Stamp Act, No Sedition Act, No Alien Bills, No Land Tax, downfall to the Tyrants of America; peace and retirement to the President; Long Live the Vice President” was arrested and tried, fined $480, and sentenced to eighteen months in prison.