America had been at war with the British Empire since 1812, but most of the action had consisted of a series of border skirmishes along the Great Lakes. The start-up capital of Washington held little strategic value – the thriving ports of New York or Baltimore were more important, but the British needed to break the will of the Americans. 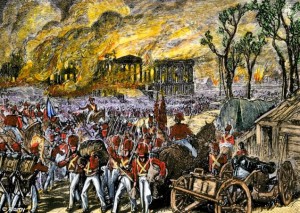 In late August the British army of approximately 4,000 approached Washington, and the majority of its residents fled. The American defenders were quickly routed in a battle a few miles away, and a messenger was dispatched to First Lady Dolley Madison of the impending attack. She tore the full-length portrait of George Washington from a White House wall and fled across the Potomac.

That evening, the British army arrived on Capitol Hill and set about destroying all the public buildings in the city.

When the detachment sent out to destroy the Executive Mansion entered the White House, they found the dining parlor waiting for them. The dinner table was spread and covers laid for forty guests. Several kinds of wine, in handsome cut glass decanters, were cooling on the sideboard; plate holders stood by the fireplace, filled with dishes and plates; knives, forks, and spoons were arranged for immediate use; in short, everything was ready for the entertainment of a ceremonious party.

When they entered the kitchen, they discovered spits, loaded with joints of various sorts, turned before the fire; pots, saucepans, and other culinary utensils stood upon the grate; and all the requisites for an elegant and substantial repast were in place for an elegant banquet.

The soldiers were tired and hungry. They sat down, perhaps not in the most orderly manner, and helped themselves to a sumptuous feast, lubricated by a generous helping of the wines.

After finishing their feast, they set fire to the White House.

By the following day, nothing could be seen except charred walls and smoking ruins.