Elizabeth Ann Bayley Seton is a Saint! She is the first daughter of the United States of America to be glorified with this incomparable attribute!

Saint Elizabeth Ann Seton was born, brought up and educated in New York in the Episcopalian Communion. To this 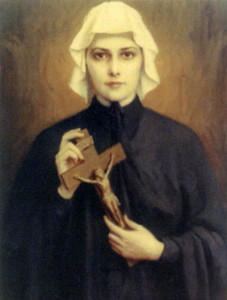 Church goes the merit of having awakened and fostered the religious sense and Christian sentiment which in the young Elizabeth were naturally predisposed to the most spontaneous and lively manifestations. We willingly recognize this merit, and, knowing well how much it cost Elizabeth to pass over to the Catholic Church, we admire her courage for adhering to the religious truth and divine reality which were manifested to her therein.

And we are likewise pleased to see that from this same adherence to the Catholic Church she experienced great peace and security, and found it natural to preserve all the good things which her membership in the fervent Episcopalian community had taught her, in so many beautiful expressions, especially of religious piety, and that she was always faithful in her esteem and affection for those from whom her Catholic profession had sadly separated her.

And then we must note that Elizabeth Seton was the mother of a family and at the same time the foundress of the first Religious Congregation of women in the United States. Although this social and ecclesial condition of hers is not unique or new … in a particular way it distinguishes Saint Elizabeth Ann Bayley Seton for her complete femininity…

And we rejoice …as the Church renders the greatest honor possible to Elizabeth Ann Bayley Seton and extols her personal and extraordinary contribution as a woman -a wife, a mother, a widow, and a religious…

The apostolate of helping the poor and the running of parochial schools in America had this humble, poor, courageous and glorious beginning….

And may they always be mindful of the final exhortation of their Foundress Saint those words that she pronounced on her deathbed, like a heavenly testament, on January 2, 1821: “Be children of the Church”.