October 19, 1781: The British Surrender at Yorktown

As the British band played “The World Turned Upside Down”, General Cornwallis retreated to his quarters, claiming he was not feeling well. His subordinate, General O’Hara, first tried to surrender to the Comte de Rochambeau, who directed the British officer to General Washington; Washington in turn directed him to his own subordinate General Lincoln. 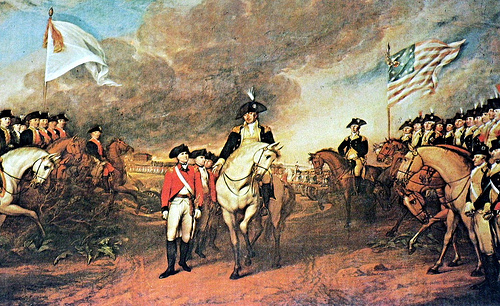 “At about twelve o’clock, the combined army was arranged and drawn up in two lines extending more than a mile in length. The Americans were drawn up in a line on the right side of the road, and the French occupied the left. At the head of the former, the great American commander [George Washington], mounted on his noble courser, took his station, attended by his aides. At the head of the latter was posted the excellent Count Rochambeau and his suite. The French troops, in complete uniform, displayed a martial and noble appearance; their bands of music, of which the timbrel formed a part, is a delightful novelty, and produced while marching to the ground a most enchanting effect.

The Americans, though not all in uniform, nor their dress so neat, yet exhibited an erect, soldierly air, and every countenance beamed with satisfaction and joy. The concourse of spectators from the country was prodigious, in point of numbers was probably equal to the military, but universal silence and order prevailed.
It was about two o’clock when the captive army advanced through the line formed for their reception.

Every eye was prepared to gaze on Lord Cornwallis, the object of peculiar interest and solicitude; but he disappointed our anxious expectations; pretending indisposition, he made General O’Hara his substitute as the leader of his army. This officer was followed by the conquered troops in a slow and solemn step, with shouldered arms, colors cased and drums beating a British march.

Having arrived at the head of the line, General O’Hara, elegantly mounted, advanced to his excellency the commander-in-chief, taking off his hat, and apologized for the non-appearance of Earl Cornwallis. With his usual dignity and politeness, his excellency pointed to Major-General Lincoln for directions, by whom the British army was conducted into a spacious field, where it was intended they should ground their arms.

The royal troops, while marching through the line formed by the allied army, exhibited a decent and neat appearance, as respects arms and clothing, for their commander opened his store and directed every soldier to be furnished with a new suit complete, prior to the capitulation. But in their line of march we remarked a disorderly and unsoldierly conduct, their step was irregular, and their ranks frequently broken.

But it was in the field, when they came to the last act of the drama, that the spirit and pride of the British soldier was put to the severest test: here their mortification could not be concealed.

Some of the platoon officers appeared to be exceedingly chagrined when giving the word “ground arms,” and I am a witness that they performed this duty in a very unofficer-like manner; and that many of the soldiers manifested a sullen temper, throwing their arms on the pile with violence, as if determined to render them useless. This irregularity, however, was checked by the authority of General Lincoln.

After having grounded their arms and divested themselves of their accoutrements, the captive troops were conducted back to Yorktown and guarded by our troops till they could be removed to the place of their destination.”