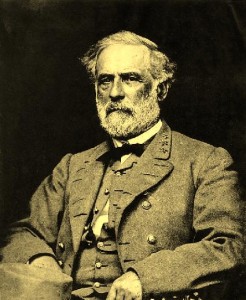 armies of the Confederacy and I presided in its Cabinet. We passed through many sad scenes together, but I cannot remember that there was ever aught but perfect harmony between us. If ever there was difference of opinion it was dissipated by discussion, and harmony was the result. I repeat, we never disagreed, and I may add that I never in my life saw in him the slightest tendency to self-seeking. It was not his to make a record, it was not his to shift blame to other shoulders; but it was his with an eye fixed upon the welfare of his country, never faltering to follow the line of duty to the end. His was the heart that braved every difficulty; his was the mind that wrought victory out of defeat.

He has been charged with “want of dash.” I wish to say that I never knew Lee to falter to attempt anything ever man could dare. An attempt has also been made to throw a cloud upon his character because he left the army of the United States to join in the struggle for the liberty of his State. Without trenching at all upon politics, I deem it my duty to say one word in reference to this charge. Virginian born, descended from a family illustrious in Virginia’s annals, given by Virginia to the service of the United States, he represented her in the Military Academy at West Point. He was not educated by the Federal Government, but by Virginia; for she paid her full share for the support of that institution, and was entitled to demand in return the services of her sons. Entering the army of the United States, he represented Virginia there also, and nobly. On many a hard-fought field Lee was conspicuous, battling for his native State as much as for the Union…

Here he now sleeps in the land he loved so well, and that land is not Virginia only, for they do injustice to Lee who believe he fought only for Virginia. He was ready to go anywhere, on any service for the good of his country, and his heart was as broad as the fifteen States struggling for the principles that our forefathers fought for in the Revolution of 1776.

He is sleeping in the same soil with the thousands who fought under the same flag, but first offered up their lives. Here the living are assembled to honor his memory, and there the skeleton sentinels keep watch over his grave.

This citizen! this soldier! this great general! this true patriot! left behind him the crowning glory of a true Christian. His Christianity ennobled him in life, and affords us grounds for the belief that he is happy beyond the grave.