“Tuesday last being the Anniversary of the Commemoration of the happy Deliverance of the English Nation from the Popish Plot, commonly called The Powder Plot, the Guns at Castle William and at the Batteries in Town were fired at one o’clock; as also on board the Men of War in the Harbour. 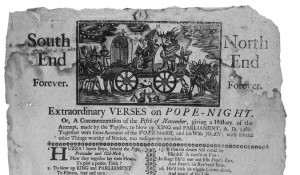 It has long been the Custom in this Town on the Fifth of November for Numbers of Persons to exhibit on Stages some Pageantry, denoting their Abhorrence of POPERY and the horrid Plot which was to have been executed on that Day in the Year 1605; these Shows of late Years has been continued in the Evening, and we have often seen the bad Effects attending them at such a time; the Servants and Negroes would disguise themselves, and being armed with clubs would engage each other with great Violence, whereby many came off badly wounded; in short they carried it to such Lengths that two Parties were created in the Town, under the Appellation of North-End and South-End:

But the Disorders that had been committed from Time to Time induced several Gentlemen to try a Reconciliation between the two Parties; accordingly the Chiefs met on the First of this Instant, and conducted that Affair in a very orderly Manner; in the Evening the Commander of the South entered into a Treaty with the Commander of the North, and after making several Overtures they reciprocally engaged on a UNION, and the former Distinctions to subside; at the same Time the Chiefs with their Assistants engaged upon their Honor no Mischiefs should arise by their Means, and that they would prevent and Disorders, on the 4th.

When the Day arrived the Morning was all Quietness, about Noon the Pageantry, representing the Pope, Devil, and several other Effigies signifying Tyranny, Oppression, Slavery, were brought on Stages from the North and South, and met in King [State] Street, where the Union was established in a very ceremonial Manner, and having given three Huzzas, they interchanged Ground, the South marched to the North, and the North to the South, parading thro’ the Streets until they again met near the Court House: The whole then proceeded to the Tree of Liberty, under the Shadow of which they refreshed themselves for a while, and then retreated to the Northward, agreeable to their Plan; – they reached Copp’s Hill before 6 o’clock, where they halted, and having enkindled a Fire, the whole Pageantry was committed to the Flames and consumed:

This being finished every person was requested to retire to their respective Homes – It must be noticed to the Honor of all those concerned in this business that every thing was conducted in a most regular manner, and such Order observed as could hardly be expected among a concourse of several thousand people – all seemed to be joined, agreeable to their principal Motto Levely Unity – The Leaders, Mr. McIntoth form the South, and Mr. Swift from the North, appeared in Military Habits, with small canes resting on their left arms, having music in Front and Flank; their assistants appeared also distinguished with small reeds, then the respective Corps followed, among whom were a great Number of Persons in Rank: These with the Spectators filled the Streets; not a Club was seen among the whole, nor was any Negro allowed to approach near the Stages; – after the Conflagration the Populace retired, and the Town remained the whole Night in better Order than it had ever been on this Occasion.”