On a quiet Sunday afternoon in late fall of 1898, two policemen who were pedaling their bicycles through a Capitol Hill neighborhood were nearly knocked off their bicycles when a tremendous blast shattered the calm.

They turned instinctively toward the Capitol, three blocks away, and were aghast to see a sheet of flames rising from the building’s basement-level windows along the east front. 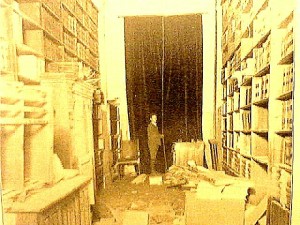 Inside the building, another police officer had just detected the odor of gas – He was not unduly alarmed; gas was used to light the Capitol’s interior. He set out to investigate, but just then a huge explosion heaved the floor north of the rotunda on the Senate side upward spewing brick, plaster, and dense black smoke in all directions. Fire raced up an elevator shaft to the upper floors, where it melted steel, cracked stone, and incinerated priceless records.

By the 1890s, the Capitol was largely lit by new incandescent electrical lamps, but the Capitol still employed chandeliers outfitted with gas. Gas pipes had honeycombed the Capitol since mid-century, when gas replaced whale oil as the principal means of lighting the building. In 1865 1,083 gas jets provided lighting for the rotunda.

On those rare occasions when evening sessions of Congress coincided with gala White House entertainments, the city lacked sufficient gas to fuel, at the same time, the East Room’s chandeliers and the lighting apparatus above the Senate and House chambers.

Fortunately the explosion occurred when the building was mostly empty, it burned itself out quickly, and no one was injured. The explosion of November 6, 1898 hastened the Capitol’s transition from gas to electricity.