Among the great days of national remembrance, none is more deeply moving to Americans of our generation than the Eleventh of November, the Anniversary of the Armistice of 1918, the day sacred to the memory of those who gave their lives in the war which that day ended. 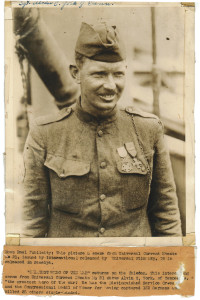 Our observance of this Anniversary has a particular significance in the year 1941.

For we are able today as we were not always able in the past to measure our indebtedness to those who died.

A few years ago, even a few months, we questioned, some of us, the sacrifice they had made.  Standing near to the tomb of the Unknown Soldier, Sergeant York of Tennessee, on a recent day spoke to such questions.

“There are those in this country today”, said Sergeant York, “who ask me and other veterans of World War Number One, ‘What did it get you?’ ”

Today we know the answer — all of us.  All who search their hearts in honesty and candor know it.

We know that these men died to save their country from a terrible danger of that day. We know, because we face that danger once again on this day.

People who asked that question of Sergeant York, and his comrades forgot the one essential fact which every man who looks can see today.

They forgot that the danger which threatened this country in 1917 was real — and that the sacrifice of those who died averted that danger.

Because the danger was overcome they were unable to remember that the danger had been present.

Because our freedom was secure they took the security of our freedom for granted and asked why those who died to save it should have died at all.

“What was there in it for you?”

But because the war had been won we forgot, some of us, that the war might have been lost.

Whatever we knew or thought we knew a few years or months ago, we know now that the danger of brutality and tyranny and slavery to freedom-loving peoples can be real and terrible.

We know why these men fought to keep our freedom — and why the wars that save a people’s liberties are wars worth fighting and worth winning — and at any price.

The men of France, prisoners in their cities, victims of searches and of seizures without law, hostages for the safety of their masters’ lives, robbed of their harvests, murdered in their prisons — the men of France would know the answer to that questions. They know now what a former victory of freedom against tyranny was worth.

The Czechs too know the answer.  The Poles. The Danes. The Dutch. The Serbs. The Belgians. The Norwegians. The Greeks.

It is in our charge now, as it was America’s charge after the Civil War, to see to it “that these dead shall not have died in vain”. Sergeant York spoke thus of the cynics and doubters: “The thing they forget is that liberty and freedom and democracy are so very precious that you do not fight to win them once and stop. Liberty and freedom and democracy are prizes awarded only to those peoples who fight to win them and then keep fighting eternally to hold them.”