I urge a sixteenth amendment, because ‘manhood suffrage,’ or a man’s government, is civil, religious, and social disorganization. 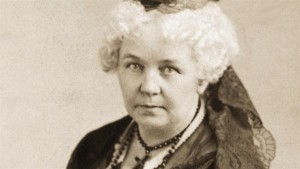 The male element is a destructive force, stern, selfish, aggrandizing, loving war, violence, conquest, acquisition, breeding in the material and moral world alike discord, disorder, disease, and death. See what a record of blood and cruelty the pages of history reveal! Through what slavery, slaughter, and sacrifice, through what inquisitions and imprisonments, pains and persecutions, black codes and gloomy creeds, the soul of humanity has struggled for the centuries, while mercy has veiled her face and all hearts have been dead alike to love and hope!

The male element has held high carnival thus far; it has fairly run riot from the beginning, overpowering the feminine element everywhere, crushing out all the diviner qualities in human nature, until we know but little of true manhood and womanhood, of the latter comparatively nothing, for it has scarce been recognized as a power until within the last century. Society is but the reflection of man himself, untempered by woman’s thought; the hard iron rule we feel alike in the church, the state, and the home. No one need wonder at the disorganization, at the fragmentary condition of everything, when we remember that man, who represents but half a complete being, with but half an idea on every subject, has
undertaken the absolute control of all sublunary matters.

People object to the demands of those whom they choose to call the strong-minded, because they say ‘the right of suffrage will make the women masculine.’ That is just the difficulty in which we are involved today. Though disfranchised, we have few women in the best sense; we have simply so many reflections, varieties, and dilutions of the masculine gender. The strong, natural characteristics of womanhood are repressed and ignored in dependence, for so long as man feeds woman she will try to please the giver and adapt herself to his condition. To keep a foothold in society, woman must be as near like man as possible, reflect his ideas, opinions, virtues, motives, prejudices, and vices. She must respect his statutes, though they strip her of every inalienable right, and conflict with that higher law written by the finger of God on her own soul.