A revolver shot rang out and the rejoicing began in Guthrie. After an existence of eighteen years, six months and twenty-four days, the Territory of Oklahoma with Indian Territory, became a memory today with the signing of the statehood proclamation by President Roosevelt. The news of the admission of the state into the Union was received here at 9:18 o’clock this morning, two minutes after the proclamation was signed. 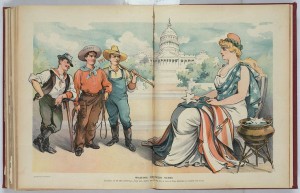 J. C. Nelson, superintendent of the Western Union Telegraph Company was here from Omaha and had secured a direct wire to the White House, thereby preventing any delay in the transmission of the message. This announcement was first made public by Hugh Scott, private secretary to Governor Frantz. Scott stood on the portico and fired an automatic pistol as a signal to the militia companies, which replied with volleys of blank cartridges. Instantly the city broke into a tumult of noise.

Bands began playing, bells were rung, steam whistles blown and every man and boy who could fire a gun added to the uproar. The firing of guns at public demonstrations was typical of Oklahoma. In early days volunteer fire departments were called out in this way. The air was sharp and crisp and the morning resplendent with sunshine. The crowds that had been pouring into Guthrie since the arrival of early trains were in a jubilant mood. Many women joined with men in the streets in shouting a welcome to statehood.
Governor Haskell’s apartments were jammed with people from every portion of the new state. Many of the women were handsomely gowned. The crush extended from his office at the Hotel Royal through the parlors, down the wide stairway, through the hotel lobby and across the sidewalk into the street. He was showered with congratulations and with kindly words for the success of his administration.

Governor Haskell had laid aside his customary sack coat for a Prince Albert, but wore it easily and moved from group to group as if he were at a big house party. Even before he had taken his oath of office Governor Haskell proceeded to the state’s business and his first act was against the Standard Oil Company. He had been informed at an early hour this morning that the Standard company was preparing to take advantage of the short interval in which neither the Territorial nor the State officers would be in existence, that it might lay an interstate natural gas pipe line from Washington County into Kansas.

During this interval it was believed that the United States Indian Agent at Muskogee also might not have authority to interfere with the Standard. Governor Haskell sent a telegram to the deputy County Attorney of Washington County instructing him peremptorily to prevent the laying of the gas pipe line. The question involved is one of greatest interest to citizens of the new state who wish, if possible, to prevent the exportation of natural gas outside the state, preferring that the vast natural gas resources of Oklahoma should be used to build up home industries.

J. J. Love of Woodward, member of the Corporation Commission, kept his promise made at home during his campaign and brought forty young women of Woodward to Guthrie in a special car at his expense. Love is a typical frontier Texan, about six feet three inches high and walks with swagger of a cowboy. For many years he was the close personal friend of the late Temple Houston.
“The young ladies with me today,” said Love, “run anywhere from the daughters of bankers to the daughters of laborers and you can’t tell them apart. They are all my friends and my people and I’m certainly going to show them a good time.”