At 5 P. M. Willard and Wiser returned, they had not been lost as we apprehended.    they informed us that it was not untill the fifth day after leaving the Fort that they could find a convenient place for making salt; that they had at length established themselves on the coast about 15 Miles S. W. from this, near the lodge of some Killamuck families; that the Indians were very friendly and had given them a considerable quantity of the blubber of a whale which perished on the coast some distance S. E. of them; part of this blubber they brought with them, it was white & not unlike the fat of 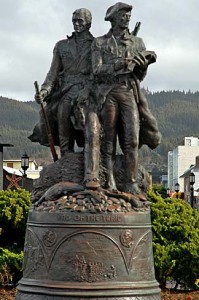 Poark, tho’ the texture was more spongey and somewhat coarser. I had a part of it cooked and found it very pallitable and tender, it resembled the beaver or the dog in flavour.    it may appear somewhat extraordinary tho’ it is a fact that the flesh of the beaver and dog possess a very great affinity in point of flavour.

These lads also informed us that J. Fields, Bratton and Gibson (the Salt makers) had with their assistance erected a comfortable camp killed an Elk and several deer and secured a good stock of meat; they commenced the making of salt and found that they could obtain from 3 quarts to a gallon a day; they brought with them a specemine of the salt of about a gallon, we found it excellent, fine, strong, & white; 〈salt;〉 this was a great treat to myself and most of the party, having not had any since the 20th ultmo.; I say most of the party, for my friend Capt. Clark declares it to be a mear matter of indifference with him whether he uses it or not; for myself I must confess I felt a considerable inconvenience from the want of it; the want of bread I consider as trivial provided, I get fat meat, for as to the species of meat I am not very particular, the flesh of the dog the horse and the wolf, having from habit become equally formiliar with any other, and I have learned to think that if the chord be sufficiently strong, which binds the soul and boddy together, it does not so much matter about the materials which copose it.

Colter also returned this evening unsuccessfull from the chase, having been absent since the 1st Inst.—    Capt. Clark determined this evening to set out early tomorrow with two canoes and 12 men in quest of the whale, or at all events to purchase from the Indians a parcel of the blubber, for this purpose he prepared a small assortment of merchandize to take with him.