In 1780, David Landreth and his family left England for Montreal, Canada where he intended to establish a seed business, but within four years, the harsh Canadian climate proved too hostile. He chose to relocate to Philadelphia, Pennsylvania where people appeared to have more free time, as well as wealth and sophistication.

On January 7, 1784, he started his first garden center on High Street. He sold seeds to the City of Philadelphia and 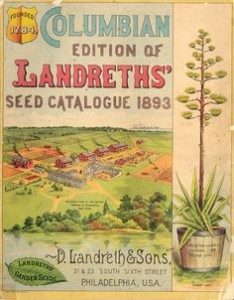 In 1826, the Company introduced a new kind of spinach, known as Bloomsdale Spinach, one of the favorites of gardeners even today. His son, David Landreth II, joined the firm in the early 1820s. Together with his father, David Landreth II founded the Pennsylvania Horticultural Society in 1828, which has sponsored the Philadelphia Flower Show, the oldest flower show in the country, for nearly 175 years.

David Landreth II imported many rare conifers and deciduous trees, including the giant rhododendron, kalmias and azaleas. During his long life, he introduced many new plants and shrubs, from all over the world and devoted much of his time to promoting the art and science of plant breeding. One of his greatest international adventures occurred in 1852 when, under his direction, Landreth’s prepared thousands of pounds of American vegetable seeds and put them in glass for Commodore Perry’s historic expedition to Japan.

When Commodore Perry returned to the United States, he brought to the Landreth Nurseries the first Japanese shrubs and plants ever to be imported into this country. In 1881, Burnet Landreth, the son of David Landreth II, supplied General Greeley of the Lady Franklin Bay Expedition to the North Pole with a variety of seeds. The expedition was ill-fated, but in 1899 when Commodore Perry’s expedition rescued some of the Lady Franklin’s seeds, a mere 490 miles from the North Pole, they found that 50 percent of the radishes germinated after being in the Polar region for 16 years.

Today, the D. Landreth Seed Company is the fifth oldest corporation in America. Among its many historic claims is the fact that the company sold seed to every American president from George Washington to Franklin D. Roosevelt.