He was a strapping young officer (over six foot two inches tall) who had grown up in a modestly prosperous Virginia plantation family. He had not been to college, but had been trained to be a surveyor, a profession in great demand at this time of continual westward expansion. 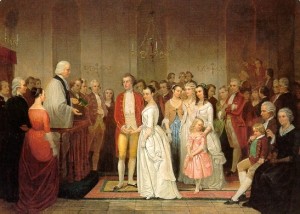 In 1752 he received an appointment to a minor military position. Fighting alongside Royal forces during the French and Indian War, he earned a reputation for fairness, bravery, and immense personal courage, and rose to the rank of Colonel of the Virginia Regiment.

But he longed for more than just the military life. In March 1758, during an interlude in the fighting, he traveled to Williamsburg, where the colony’s leading men gathered for meetings of the House of Burgesses. There he heard news about a young widow, and he danced with her at a cotillion ball.

She was twenty-six years old, and quite attractive. She enjoyed riding horses, gardening, sewing, playing the spinet and dancing. She owned nearly 300 slaves and more than 17,500 acres of land. And she had a four year old son “Jacky” and a two year old daughter called “Patsy”.

The young Colonel set out to pay a visit to the widow’s plantation. He noted in his account records that he left very generous tips for her household slaves, and returned for another visit a week later, before he returned to his military post.

Within months of that first meeting he began renovating the 2000-acre estate located high above the Potomac River he had inherited from his half-brother. She placed an order for wedding finery from London, including brilliant purple silk slippers and a dress that was to be “grave but not Extravagent nor to be mourning,”

She must have believed that she had found someone she could trust as well as love. She didn’t need the money, and while many widows wrote premarital contracts that protected the assets they had from their previous marriage, she did not.  Having grown up in a large family, she loved children and hoped to have more.

Shortly thereafter, George, Martha, Jacky, and Patsy moved into the enlarged and remodeled Mount Vernon and began their adventure together…