It was late in the evening and the paddlewheel steamship Lexington was halfway between New York City and Stonington, Connecticut when it caught fire. Flames broke out near the mast but quickly spread to a large load of 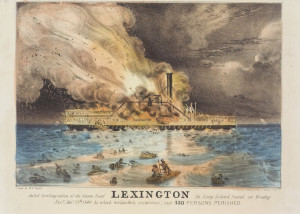 cotton bales, which caused a raging inferno that engulfed the entire ship. The passengers either burned to death, or were forced to jump into the frigid water.

By the time a rescue ship, the sloop Merchant, arrived the next morning, only four souls were found clinging to floating bales or other debris in the icy waters. Carl Follen, who had introduced the Christmas tree to New England, was dead, along with 143 other souls.

The devastating news hit the New York newspapers in graphic detail, but at the time newspapers were just words on paper with no illustrations.

However, a man named Nathaniel Currier was making lithographs in the city at the time, mostly of architectural plans and music manuscripts. The small printing jobs were not that profitable and so Currier also produced portrait prints and memorials of the dead. In 1835, he had produced a print depicting the collapse of the Planter’s Hotel, New Orleans, which became a huge seller.

When the Lexington sank Currier quickly made another disaster print which depicted the steamship burning in the Sound, while a smattering of passengers struggle to stay alive in the choppy water. Some are on floating debris, others not. A man in a top hat and tails is seen reaching out to save another woman.

The lithograph, entitled “Awful Configuration of the Steamboat Lexington in the Long Island Sound on Monday Evening, January 13. 1840, by which melancholy occurrence over One Hundred Persons Perished” was a resounding success.

The tragic lithograph set Currier’s career in motion. He was soon publishing his illustrations in the New York Sun, and when his bookkeeper James Ives joined him, “Currier & Ives” became the  most popular publisher of nostalgic prints in the country.