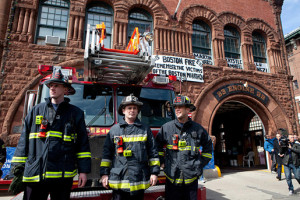 Mr. Sellicks house and goods, Mr. Blackleech house and goods. The others I have forgotten their names. It was the most dreadful! fire that I ever Saw by reason of the barrell of Gun Powder which they had in their houses which made men fearful to come near them The Lord sanctifie his hand to us all.”

The terrible conflagration raged along State and Washington Streets where Henry Shrimpton, a brazier, lived alongside Rev. John Wilson and David Sellick. Rob Woodmancye, the school teacher, watched helplessly as his house was pulled down to stop the progress of the fire.

Capt. Robert Keayne organized a response to the disaster which had brought the first loss of life from fire recorded in the colony.
At the town meeting held March 14th the selectmen passed the following laws:

It is ordered then that there shall be a ladder or ladders to every house within this town that shall reach to the ridge of the house, which every householder shall provide for his house.

It is Ordered that every house holder shall provide a pole of above 12 foot long, with a good large swab at the end of it, to reach the roof of his house to quench fire in case of such danger.

It is Ordered that the selectmen shall forthwith provide six good and long ladders for the Towne’s use, which shall hang at the outside of the meeting house, there to be ready in case of fire, these ladders to be branded with the town marke.

It is Ordered that whosoever shall take away any of these ladders, excepting in case of fire, shall forfit to the town Treasury twenty shillings.

It is Ordered that four good strong Iron crooks, with chains and ropes fitted to them, and these crooks fastened on a good strong pole be forewith provided by the selectmen, which shall hang at the side of the meeting house, there to be ready in case of fire.

William Franklin and neighbors about his house is granted liberty to make a cistern of 12 foot or greater, if they see cause, at the Pump which standeth in the high way near to the States Arms Tavern for to hold water for to be helpful in case of fire, unto the towne. He is to make it safe from any danger of children.