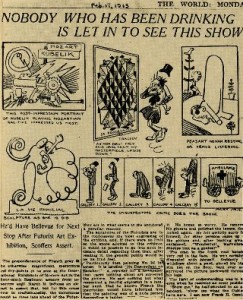 In this recent art exhibition the lunatic fringe was fully in evidence, especially in the rooms devoted to the Cubists and the Futurists, or Near-Impressionists. I am not entirely certain which of the two latter terms should be used in connection with some of the various pictures and representations of plastic art—and, frankly, it is not of the least consequence. The Cubists are entitled to the serious attention of all who find enjoyment in the colored puzzle pictures of the Sunday newspapers. Of course there is no reason for choosing the cube as a symbol, except that it is probably less fitted than any other mathematical expression for any but the most formal decorative art.

There is no reason why people should not call themselves Cubists, or Octagonists, or Parallelopipedonists, or Knights of the Isosceles Triangle, or Brothers of the Cosine, if they so desire; as expressing anything serious and permanent, one term is as fatuous as another. Take the picture which for some reason is called “A naked man going down stairs.” There is in my bath-room a really good Navajo rug which, on any proper interpretation of the Cubist theory, is a far more satisfactory and decorative picture.

Now if, for some inscrutable reason, it suited somebody to call this rug a picture of, say, “A well-dressed man going up a ladder,” the name would fit the facts just about as well as in the case of the Cubist picture of the “Naked man going down stairs.” From the standpoint of terminology, each name would have whatever merit inheres in a rather cheap straining after effect; and from the standpoint of decorative value, of sincerity, and of artistic merit, the Navajo rug is infinitely ahead of the picture.