February 18, 1933: Herbert Hoover advises FDR on the danger of Fear

A most critical situation has arisen in the country of which I feel it my duty to advise you confidentially. I am therefore taking this course of writing you myself and sending it to you through the Secret Service for your hand direct as obviously its misplacement would only feed the fire and increase the dangers. 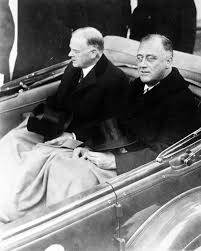 The major difficulty is the state of the public mind, for there is a steadily degenerating confidence in the future which has reached the height of general alarm. I am convinced that a very early statement by you upon two or three policies of your administration would serve greatly to restore confidence and cause a resumption of the march of recovery.

The large part which fear and apprehension play in the situation can be well demonstrated by repeated experience in the past few years and the tremendous lift which has come at times by the removal of fear can be easily demonstrated.

One of the major underlying elements in the broad problem of recovery is the re-expansion of credit so critically and abruptly deflated by the shocks from Europe during the last half of 1931. The visible results were public fear, hoarding, bank failures, withdrawal of gold, flight of capital, falling prices, increased unemployment, etc. Early in 1932 we created the agencies which have steadily expanded available credit ever since that time and continue to expand it today, but confidence must run parallel with expanding credit and the instances where confidence has been injured run precisely with the lagging or halting of recovery.

With the election, there came the natural and inevitable hesitation all along the economic line pending the demonstration of the policies of the new administration. But a number of very discouraging things have happened on top of this natural hesitation. The breakdown in balancing the budget by the House of Representatives; the proposals for inflation of the currency and the wide spread discussion of it; the publication of R.F.C. loans and the bank runs, hoarding and bank failures from this cause; increase in unemployment due to imports from depreciated currency countries; failure of the Congress to enact banking, bankruptcy and other vital legislation; unwillingness of the Congress to face reduction in expenditures; proposals to abrogate constitutional responsibility by the Congress with all the chatter about dictatorship, and other discouraging effects upon the public mind. They have now culminated to a state of alarm which is rapidly reaching the dimensions of a crisis. Hoarding has risen to a new high level; the bank structure is weakened as witness Detroit and increased failures in other localities. There are evidences of flight of capital and foreign withdrawals of gold. In other words we are confronted with precisely the same phenomena we experienced late in 1931 and again in the spring of 1932. The whole has its final expression in the increase of unemployment, suffering and general alarm.

I therefore return to my suggestion at the beginning as to the desirability of clarifying the public mind on certain essentials which will give renewed confidence. It is obvious that as you will shortly be in position to make whatever policies you wish effective, you are the only one who can give these assurances. Both the nature of the cause of public alarm and experience give such an action the prospect of success in turning the tide. I do not refer to action on all the causes of alarm but it would steady the country greatly if there could be prompt assurance that there will be no tampering or inflation of the currency; that the budget will be unquestionably balanced even if further taxation is necessary; that the government credit will be maintained by refusal to exhaust it in issue of securities. The course you have adopted in inquiring into the problems of world stabilization are already known and helpful. It would be of further help if the leaders were advised to cease publication of R.F.C. business.

I am taking the liberty of addressing you both because of my anxiety over the situation and my confidence that from four years of experience that such tides as are now running can be moderated and the processes of regeneration which are always running can be released.