During the American Revolution the Lenni Lenape Indians of the Ohio Country found themselves uncomfortably stuck between the American colonists’ outpost at Fort Pitt (Pittsburgh) and the British forces at Fort Detroit. 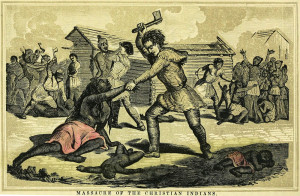 Some Lenape allied themselves with the Crown and moved closer to Fort Detroit. Others signed a treaty with the Americans, hoping to secure a state to be inhabited exclusively by Native Americans. A third group of converted Christians lived in mission villages led by Moravian missionaries, and opted for a neutral policy of peace.
The war brought escalating violence on all sides. The Moravian villages were uprooted and British-allied Indians arrested the missionaries David Zeisberger and John Heckewelder and brought them to Detroit where the British put them on trial for treason. The missionaries were acquitted, but the Lenape had been displaced from their homes.

In February 1782, more than 100 hungry Lenape returned to their old village at Gnadenhutten to harvest what crops they could and collect stored food they had been forced to leave behind, but in early March they found themselves under attack by a raiding party of 160 Pennsylvania militia led by Lieutenant Colonel David Williamson.

The militia rounded up the Lenape and accused them of taking part in raids into Pennsylvania. The Lenape denied the charges. The militia held a council and held a vote – The choice was hard – to kill the Lenape or let them go free.

Refusing to take part, some militiamen left the area. 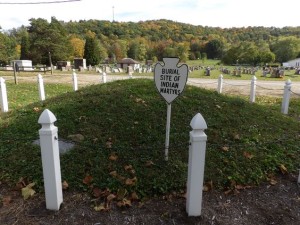 After the vote, the Lenape requested time to prepare for death; they spent the night praying and singing hymns.

The next morning, March 8, 1782, the militia brought 28 men, 29 women, and 39 children to two “killing houses”, one for men and the other for women and children. The militia tied the Indians, stunned them with mallet blows to the head, and killed them with fatal scalping cuts.

The militia then looted the villages, and carried away everything the people had: furs, pewter, tea sets, clothing, The bodies were piled in the mission buildings and burned to the ground.

Obadiah Holmes, Jr, who had opposed the killing, wrote:
“Nathan Rollins & brother who had had a father & uncle killed took the lead in murdering the Indians, …& Nathan Rollins had tomahawked nineteen of the poor Moravians, & after it was over he sat down & cried, & said it was no satisfaction for the loss of his father & uncle after all.”