James Naismith was teaching at the International YMCA Training School (now Springfield College) in Springfield, Massachusetts. Winter was cold and as he was the assistant physical education director to the school he was always looking for new winter activities. 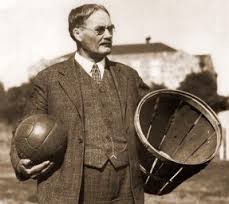 On December 21, 1891, he published rules for a new game he dreamt up. That day, he asked his class to play a match in the Armory Street court: 9 versus 9, using a soccer ball and two peach baskets. Frank Mahan, one of his students, wasn’t so happy. He just said: “Harrumph. Another new game”.  Someone proposed to call it “Naismith Game”, but the inventor demurred “We have a ball and a basket: why don’t we call it basketball?”

On March 11, 1892, with a crowd of 200 on hand, the first public basketball game was played in the Armory Hill YMCA in Springfield. In a romp, the students bested the teachers 5-1.

It was a simple game; as Naismith often said, “Basketball is just a game to play. It doesn’t need a coach… you don’t coach basketball, you just play it.” Originally, 9 players were on each team… Dr. Naismith once said that there could up to 40 on each team, if the floor was big enough.
Two vegetable baskets were nailed to the railing of an elevated running track which was about 10 feet high. The ball was a soccer ball. Of course it was a nuisance to get out the stepladder every time someone scored, so a hole was cut out of the basket, and a local carpenter added a wire rim with a chicken wire net and backboards so that fans, reaching over the railing, couldn’t deflect the shots.

These were the rules:

A player cannot run with the ball, the player must throw it from the spot on which he catches it, allowance to be made for a man who catches the ball when running at good speed.

The ball must be held in or between the hands, the arms or body must not be used for holding it.

No shouldering, holding, pushing, tripping or striking in any way the person of an opponent shall be allowed. The first infringement of this rule by any person shall count as a foul, the second shall disqualify him until the next goal is made, or if there was evident intent to injure the person, for the whole of the game, no substitute.

A foul is striking the ball with the fist, violation of rules 3 and 4, and such as described in rule 5.

If either side makes three consecutive fouls it shall count a goal for opponents.

A goal shall be made when the ball is thrown or batted from grounds into the basket and stays there If the ball rests on the edge and the opponent moves the basket it shall count as a goal.

The umpire shall be the judge of the men and shall note the fouls, and notify the referee when three consecutive fouls have been made.

The referee shall be the judge of the ball and shall decide when the ball is in play, in-bounds, and to which side it belongs, and shall keep the time. He shall decide when a goal has been made and keep account of the goals with any other duties that are usually performed by a referee.

The time shall be fifteen-minute halves, with five-minute rests between.

The side making the most goals in that time shall be declared the winner. In the case of a draw, the game may, by agreement of the captains, be continued until another goal is made.