Question. Do you know the reason for that attack on the Indians?

Answer. I do not know any exact reason. I have heard a great many reasons given. I have heard that that whole Indian war had been brought on for selfish purposes.

Colonel Chivington was running for Congress in Colorado, and there were other things of that kind; and last spring a year ago he was looking for an order to go to the front, and I understand he had this Indian war in view to retain himself and his troops in that country, to carry out his electioneering purposes.

Question. In what way did this attack on the Indians further the purpose of Colonel Chivington?

Answer. It was said – I did not hear him say it myself, but it was said that he would do something; he had this regiment of three-months men, and did not want them to go out without doing some service. Now he had been told repeatedly by different persons – by myself, as well as others – where he could find the hostile bands.

Question. Had there been, to your knowledge, any hostile act or demonstration on the part of these Indians or any of them? 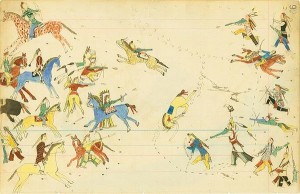 Answer. Not in this band. But the northern band, the band known by the name of Dog soldiers of Cheyennes, had committed many depredations on the Platte.

Question. Do you know whether or not Colonel Chivington knew the friendly character of these Indians before he made the attack upon them?

Answer. It is my opinion that he did.

Question: Did you tell Colonel Chivington the character and disposition of these Indians at any time during your interviews on this day?

Question. What did he say in reply?

Answer. He said he could not help it; that his orders were positive to attack the Indians.

Question. From whom did he receive these orders?

Answer. I do not know; I presume from General Curtis.

Question. Were the women and children slaughtered indiscriminately, or only so far as they were with the warriors?

Question. Were there any acts of barbarity perpetrated there that came under your own observation?

Answer. With knives; scalped; their brains knocked out; children two or three months old; all ages lying there, from sucking infants up to warriors.

Question. Did you see it done?

Question. Fall when they were killed?

Question. Did you see them when they were mutilated?

Question. By whom were they mutilated?

Answer. By the United States troops.

Question. Were there any other barbarities or atrocities committed there other than those you have mentioned, that you saw?

Answer. Yes, sir; I had a half-breed son there, who gave himself up. He started at the time the Indians fled; being a half-breed he had but little hope of being spared, and seeing them fire at me, he ran away with the Indians for the distance of about a mile. During the fight up there he walked back to my camp and went into the lodge. It was surrounded by soldiers at the time. He came in quietly and sat down; he remained there that day, that night, and the next day in the afternoon; about four o’clock in the evening, as I was sitting inside the camp, a soldier came up outside of the lodge and called me by name. I got up and went out; he took me by the arm and walked towards Colonel Chivington’s camp, which was about sixty yards from my camp. Said he, “I am sorry to tell you, but they are going to kill your son Jack.” I knew the feeling towards the whole camp of Indians, and that there was no use to make any resistance. I said, “I can’t help it.” I then walked on towards where Colonel Chivington was standing by his camp-fire; when I had got within a few feet of him I heard a gun fired, and saw a crowd run to my lodge, and they told me that Jack was dead.