When Thelma Catherine Ryan came into the world in Ely, Nevada on March 16, 1912, her Irish-American father, who had just come home from his shift in the mines, greeted her with joy – she was his “St. Patrick’s Babe in the Morn!”

The lucky nickname “Pat” stuck, but life was not easy. The Ryan family moved to California and settled on a small truc 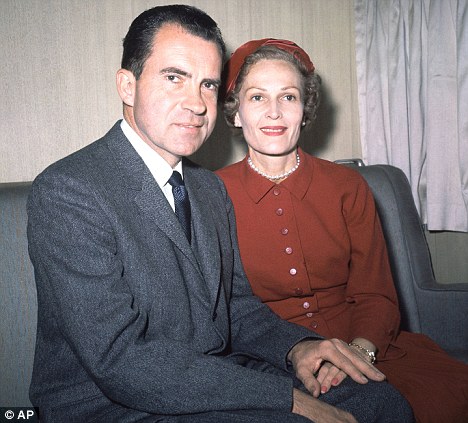 k farm near Los Angeles. As Pat grew up, she joined the rest of her family planting and harvesting peppers, beets, cauliflower, cabbage, tomatoes, and corn. When her mother took ill with a liver ailment Pat took over cooking, cleaning and laundering for her brothers and father and the hired hands. When her father came down with tuberculosis she continued her household and farm chores and also took a job at the Artesia First National Bank, rising early to clean the floors, then returning after school to work as a bookkeeper.

She got a job as a high-school teacher in Whittier, and in the evenings tried out for roles in the local Little Theater group. There she met a young lawyer named Dick Nixon who also was trying out for a role in the play “Dark Shadows”.

The young lawyer was certainly taken. He wrote to her “Somehow on Tuesday there was something electric in the usually almost stifling air in Whittier. And now I know. An Irish gypsy who radiates all that is happy and beautiful was there. She left behind her a note addressed to a struggling barrister who looks from a window and dreams. And in that note he found sunshine and flowers, and a great spirit which only great ladies can inspire. Someday let me see you again? In September? Maybe?”

Dick was not exactly a ladies man. He proposed to Pat on their first date; she thought he was nuts. That didn’t deter him. Nixon even offered to be her driver on her dates with other men. He inundated her with love letters: “When the wind blows and the rains fall and the sun shines through the clouds (as it is now) he still resolves. . . that nothing so fine ever happened to him or anyone else as falling in love with Thee — my dearest heart.”

Pat wrote back, “In case I don’t see you before, why don’t you come early Wednesday and I’ll see if I can burn a hamburger for you.”

“Every day and every night I want to see you and be with you,” Nixon wrote back.. “Let’s go for a long ride Sunday; let’s go to the mountains weekends; let’s read books in front of fires; most of all, let’s really grow together and find the happiness we know is ours.”

Dick courted Pat for two years until she was ready to get married. In the spring of 1940, he parked his car by the edge of a cliff overlooking the Pacific. He presented an engagement ring packed in a small basket brimming with mayflowers.

Pat Ryan and Dick Nixon were married at a small ceremony on June 21, 1940 at Mission Inn, Riverside, California. After a honeymoon to Laredo and Mexico City they began their married life in an apartment in Whittier.

Dick Nixon always considered marrying Pat the best decision of his life. “I am certainly not the Romeo type…I may not say much when I am with you—but all of me loves you all the time.”