The men in his cabinet wore black; their wives wore flowing gowns with jewelry and flowers in their hair. Every detail was formal.

At seven the party gathered in the Blue Room where they were joined by the President and Mrs. Lincoln. As the 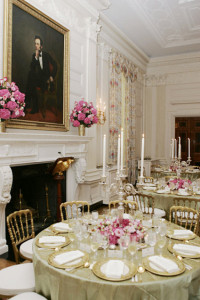 MarineBand played, all marched to the State Dining Room where gas and candle light illuminated the glittering surfaces of mirrors, polished silver, and crimson and white damask, and flowers and ferns massed about.

The guests took their places at the long, rectangular table with the president and Mrs. Lincoln facing each other halfway down. The conversation was convivial but all paid attention when the president spoke.

At one point the Attorney General, Edward. Bates, started remonstrating against the appointment of an indifferent lawyer to a position of considerable judicial importance, but the President took exception.

“Come, now Bates, he’s not half as bad as you think. Besides that, I must tell you, he did me a good turn long ago. When I took to the law, I was going to court one morning, with some ten or twelve miles of bad road before me, and I had no horse. The judge overtook me in his wagon. ‘Hollo, Lincoln! Are you not going to the courthouse? Come in and I’ll give you a seat.’ Well, I got in, and the judge went on reading his papers. Presently the wagon struck a stump on one side of the road; then it hopped off to the other. I looked out, and I saw the driver was jerking from side to side in his seat; so says I, ‘Judge, I think your coachman has been taking a little drop too much this morning.’ ‘Well I declare, Lincoln,’ said he, ‘I should not much wonder if you are right, for he has nearly upset me half-a-dozen times since starting.’ So, putting his head out of the window, he shouted, ‘Why, you infernal scoundrel, you are drunk!’ Upon which, pulling up his horses, and turning round with great gravity, the coachman said, ‘By gorra! That’s the first rightful decision you have given for the last twelve-month.”

As the table burst into laughter, the President gave the Attorney-General a knowing nod.