Fort Texas was an earthwork fort on the Rio Grande near Brownsville, Texas. It was built in the shape of a six-sided star, with an earthen face which extended 150 yards. The walls were 9 feet high and 15 feet wide, and a moat 20 feet wide and 8 feet deep circled the exterior. Inside, U.S. troops had constructed a number of bomb shelters and powder magazines to provide protection from incoming fire. 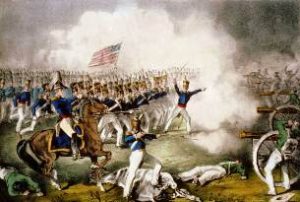 There had been no formal declaration of war, but after the outbreak of hostilities at the nearby Rancho de Carricitos General Mariano Arista began shuttling troops across the Rio Grande to besiege the isolated Fort Texas.

General Zachary Taylor expected just such a move. On May 1 he marched most of his troops to Point Isabel on the Gulf of Mexico, where he planned to meet a fleet carrying supplies needed to endure an extended siege. Major Jacob Brown and 550 men of the U.S. Seventh Infantry and portions of the Third Artillery held the post on the river.

After Taylor’s departure for the coast General Arista moved quickly to surround the U.S. outpost. On May 3, 1846, Mexican artillery opened fire on Fort Texas from all directions in hopes of forcing a quick surrender.

Only two U.S. soldiers died in the bombardment—but one of them was the fort commander Jacob Brown, who was struck in the leg by a cannon ball. Despite being wounded, Brown helped maintain troop morale throughout the siege. He survived for several days only to die just hours before the siege ended. His men renamed the liberated post—Fort Brown—in his honor.

As soon as General Taylor resupplied his force he marched with 2,300 troops and 200 supply wagons to break the siege of Fort Texas.

General Arista positioned 3,200 troops across the Matamoros road where it crossed the broad prairie of Palo Alto to block this advance. On the afternoon of May 8, 1846, he engaged the U.S. force in a fierce artillery battle—the first major clash of the war.
Mexican forces stood their ground but suffered heavy casualties.

On May 18, Taylor’s troops crossed the Rio Grande and entered the city of Matamoros without a fight. Mexican forces had withdrawn down the road leading to Monterrey. The lower Rio Grande Valley had been conceded to the U.S. Army

Although Fort Brown remained an active post until after World War II, the original earthworks were abandoned shortly after the war with Mexico. In the 1950s. Much of the structure was bulldozed to build a levee along the Rio Grande. Today a small section of the original walls has survived.

Palo Alto Battlefield National Historical Park is currently involved in activities to stabilize the surviving earthworks, to protect the site, and interpret this fort as a unit of the park.