Julia Gardiner stood five foot, three inches tall and wore long brown hair and had searching gray eyes. She lived in East Hampton and could sing and play the guitar and had been to New York’s finest finishing school and when she made her social debut in1835 she quickly became known as “the Rose of Long Island.” 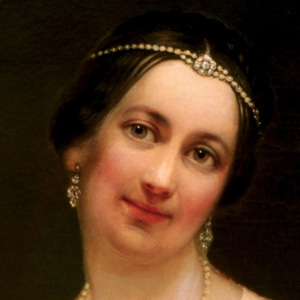 When she turned nineteen she shocked Knickerbocker society by posing for a mass-produced lithograph advertising a local clothing emporium. The picture of a rose in the ad clearly revealed the identity of the prominent socialite making the commercial endorsement.

Her parents thought it might be time to take Julia out of New York – they headed to Washington, D.C. where Julia and her sister were received at the White House by President Van Buren. Then they set off on a grand tour of Europe, and visited England, France, Switzerland, Germany, Holland, Belgium, Ireland, Scotland and Italy, where Julia was presented to Pope Leo IX, kissed his ring and explored Mount Vesuvius.

She carried on brief romances with a German baron and a Belgian count, and was presented at the court of Louis Philippe. The family arrived back in the United States in the fall of 1841 and headed to Washington for another social season. A married Congressman (future president Millard Fillmore) quite openly flirted with Julia, and In January she and her parents were welcomed as guests in the White House by the new President, John Tyler, and his daughter and daughter-in-law. The President’s wife, Letitia, lay incapacitated in her second floor bedroom, paralyzed by a stroke several years earlier.

Washington went into mourning when Letitia Tyler ended her days peacefully on September 10, 1842, holding a damask rose in her hand. When the Gardiners returned to Washington for the winter 1842-1843 social season, they increasingly became part of the presidential family’s intimate circle through friendship with the President’s sons, and President Tyler, having just lost his wife of nearly thirty years and seeking consolation, turned his affections to twenty-two year old Julia Gardiner.

He proposed marriage to her at a White House masquerade Washington’s Birthday Ball on February 22nd, just six months after the death of his wife. Julia refused to accept, but she and the President began to appear together in public, prompting speculation and rumors.

Julia’s parents decided it was time for another family trip to Europe.

Julia Gardiner, her sister and father returned for a third winter social season in Washington in February 1844. On February 28, 1844 Julia, her father, President Tyler and members of his Cabinet, as well as the former First Lady Dolley Madison and four hundred other guests set out on a Potomac River cruise on the new naval cutter, the USS Princeton.

The guests viewed the firing of the ship’s impressive big guns and then retired below decks for lunch and refreshments. When they came back up to view another test firing, the ship’s huge “Peacemaker” cannon blew up unexpectedly, exploding shrapnel into the crowd.

Instantly killed were the Secretaries of State and the Navy, the Chief of the Bureau of Construction, Equipment and Repairs, the Chargé d’Affaires to Belgium, the President’s valet, and Julia’s father -Colonel David Gardiner.

Julia and the President were below decks when the gun exploded. When Julia Gardiner found out her father had died in the explosion she fainted into President Tyler’s arms, not waking up until Tyler was carrying her off the ship.

The President was effusive in his consolation. Julia found in his mature strength a needed comfort for her loss.

Julia Gardiner Tyler, age 24, married President John Tyler, age 54, four months later at The Church of the Ascension in New York City, and she became the new First Lady of the United States of America.