May 5, 1925: John T. Scopes is arrested for teaching Darwin’s Theory of Evolution

Such obscenities as the forthcoming trial of the Tennessee evolutionist, if they serve no other purpose, at least call attention dramatically to the fact that enlightenment, among mankind, is very narrowly dispersed. It is common to 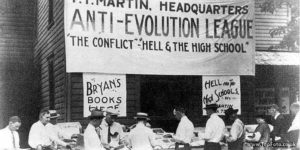 assume that human progress affects everyone — that even the dullest man, in these bright days, knows more than any man of, say, the Eighteenth Century, and is far m…ore civilized. This assumption is quite erroneous. The men of the educated minority, no doubt, know more than their predecessors, and of some of them, perhaps, it may be said that they are more civilized — though I should not like to be put to giving names — but the great masses of men, even in this inspired republic, are precisely where the mob was at the dawn of history. They are ignorant, they are dishonest, they are cowardly, they are ignoble. They know little if anything that is worth knowing, and there is not the slightest sign of a natural desire among them to increase their knowledge.

Such immortal vermin, true enough, get their share of the fruits of human progress, and so they may be said, in a way, to have their part in it. The most ignorant man, when he is ill, may enjoy whatever boons and usufructs modern medicine may offer — that is, provided he is too poor to choose his own doctor. He is free, if he wants to, to take a bath. The literature of the world is at his disposal in public libraries. He may look at works of art. He may hear good music. He has at hand a thousand devices for making life less wearisome and more tolerable: the telephone, railroads, bichloride tablets, newspapers, sewers, correspondence schools, delicatessen. But he had no more to do with bringing these things into the world than the horned cattle in the fields, and he does no more to increase them today than the birds of the air.

On the contrary, he is generally against them, and sometimes with immense violence. Every step in human progress, from the first feeble stirrings in the abyss of time, has been opposed by the great majority of men. Every valuable thing that has been added to the store of man’s possessions has been derided by them when it was new, and destroyed by them when they had the power. They have fought every new truth ever heard of, and they have killed every truth-seeker who got into their hands.