“We made a forced march from Bennington, and arrived at the lake opposite to Ticonderoga, on the evening of the 9th 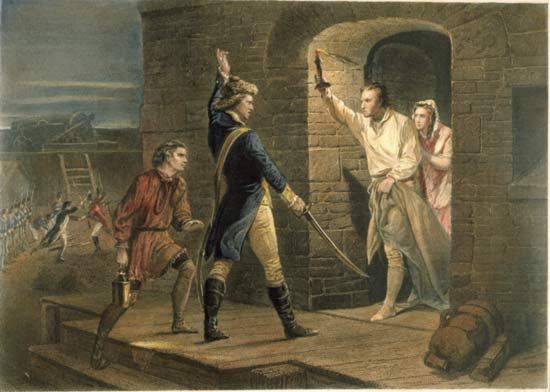 day of May, 1775, with two hundred and thirty valiant Green Mountain Boys; and it was with the utmost difficulty that I procured boats to cross the lake. However, I landed eighty-three men near the garrison, and sent the boats back for the rear guard, commanded by Colonel Seth Warner; but the day began to dawn, and I found myself under the necessity to attack the fort, before the rear could cross the lake.

The men being, at this time, drawn up in three ranks, each poised his firelock. I ordered them to face to the right, and, at the head of the center file, marched them immediately to the wicket gate aforesaid, where I found a sentry posted, who instantly snapped his fusee at me; I ran immediately toward him, and he retreated through the covered way into the parade within the garrison, gave a halloo, and ran under a bombproof. My party, who followed me into the fort, I formed on the parade in such a manner as to face the two barracks which faced each other.

The garrison being asleep, except the sentries, we gave three huzzas, which greatly surprised them. One of the sentries made a pass at one of my officers with a charged bayonet, and slightly wounded him. My first thought was to kill him with my sword; but, in an instant, I altered the design and fury of the blow to a slight cut on the side of the head, upon which he dropped his gun, and asked quarter, which I readily granted him, and demanded of him the place where the commanding officer kept; he showed me a pair of stairs in the front of a barrack, on the west part of the garrison, which led up to a second story in said barrack, to which I immediately repaired, and ordered the commander, Captain de la Place, to come forth instantly, or I would sacrifice the whole garrison; at which the Captain came immediately to the door, with his breeches in his hand, when I ordered him to deliver me the fort instantly; he asked me by what authority I demanded it: I answered him, ‘In the name of the great Jehovah and the Continental Congress.’

The authority of the Congress being very little known at that time, he began to speak again; but I interrupted him, and with my drawn sword over his head, again demanded an immediate surrender of the garrison; with which he then complied, and ordered his men to be forthwith paraded without arms, as he had given up the garrison.