Our republic has been at war before, it has asked and received the supreme sacrifices of its sons and daughters, and faith in America has been justified. Many sons and daughters made the sublime offering and went to hallowed graves 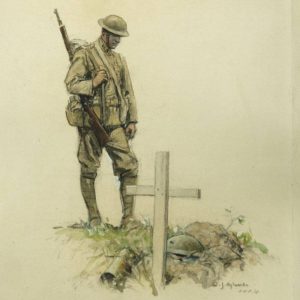 as the Nation’s defenders. But we never before sent so many to battle under the flag in foreign land, never before was there the impressive spectacle of thousands of dead returned to find eternal resting place in the beloved homeland…

These dead know nothing of our ceremony today. They sense nothing of the sentiment or the tenderness which brings their wasted bodies to the homeland for burial close to kin and friends and cherished associations. These poor bodies are but the clay tenements once possessed of souls which flamed in patriotic devotion, lighted new hopes on the battle grounds of civilization, and in their sacrifices sped on to accuse autocracy before the court of eternal justice.

We are not met for them, though we love and honor and speak a grateful tribute. It would be futile to speak to those who do not hear or to sorrow for those who cannot sense it or to exalt those who cannot know. But we can speak for country, we can reach those who sorrowed and sacrificed through their service, who suffered through their going, who glory with the Republic through their heroic achievements, who rejoice in the civilization, their heroism preserved. Every funeral, every memorial, every tribute is for the living–an offering in compensation of sorrow. When the light of life goes out there is a new radiance in eternity, and somehow the glow of it relieves the darkness which is left behind.
Never a death but somewhere a new life; never a sacrifice but somewhere an atonement; never a service but somewhere and somehow an achievement. These had served, which is the supreme inspiration in living. They have earned everlasting gratitude, which is the supreme solace in dying…

I would not wish a Nation for which men are not willing to fight and, if need be, to die, but I do wish for a nation where it is not necessary to ask that sacrifice. I do not pretend that millennial days have come, but I can believe in the possibility of a Nation being so righteous as never to make a war of conquest and a Nation so powerful in righteousness that none will dare invoke her wrath. I wish for us such an America. These heroes were sacrificed in the supreme conflict of all human history. They saw democracy challenged and defended it. They saw civilization threatened and rescued it. They saw America affronted and resented it. They saw our Nation’s rights imperiled and stamped those rights with a new sanctity and renewed security.

We shall not forget, no matter whether they lie amid the sweetness and the bloom of the homeland or sleep in the soil they crimsoned. Our mindfulness, our gratitude, our reverence shall be in the preserved Republic and maintained liberties and the supreme justice for which they died.
– Warren G. Harding