hile I stood in the place where it seems all ministers stand upon such occasions, always accompanied by the Master of Ceremony, the Room full of Ministers of State, Bishops, and all other sorts of courtiers, as well as the next room, which is the King’s bed chamber, you may well suppose that I was the center of all eyes. I was relieved however from the embarrassment of it by the Swedish and Dutch Ministers who came to me and entertained me in a very agreeable conversation during the whole time. Some other gentlemen whom I had seen before came to make their compliments to me, until the Marquis of Carmarthen returned and desired me to go with him to his Majesty.

I went with his Lordship through the Levee Room into the King’s Closet. The door was shut and I was left with his Majesty and the Secretary of State alone.

I made the three reverences, one at the door, another about half-way, and the third below the Presence, according to the usage established at this and all the Northern courts of Europe, and then addressed myself to his Majesty in the following words: 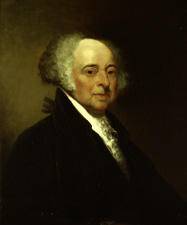 “Sir, The United States of America have appointed me their Minister Plenipotentiary to your Majesty . . . It is in Obedience to their express Commands that I have the Honor to assure your Majesty of their unanimous Disposition and Desire to cultivate the most friendly and liberal Intercourse between your Majesty’s Subjects and their Citizens . . . The appointment of a Minister from the United States to your Majesty’s Court, will form an Epoch in the History of England & of America. I think myself more fortunate than all my fellow Citizens in having the distinguished Honor to be the first to stand in your Majesty’s royal Presence in a diplomatic Character . . .”

The King listed to every word I said with dignity, but with an apparent emotion: 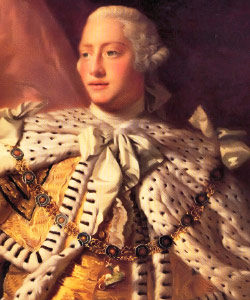 “I wish you Sir, to believe, and that it may be understood in America, that I have done nothing in the late Contest, but what I thought myself indispensably bound to do, by the Duty which I owed to my People. I will be very frank with you. I was the last to consent to the Separation, but the Separation having been made and having become inevitable, I have always said, as I say now, that I would be the first to meet the Friendship of the United States as an independent Power. . . let the Circumstances of Language; Religion and Blood have their natural and full Effect.”