They made us many promises, more than I can remember. But they kept but one–They promised to take our land…and they took it. 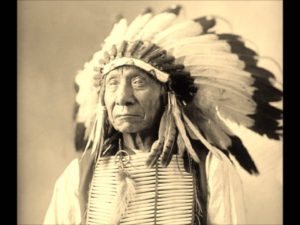 In 1868, men came out and brought papers. We could not read them and they did not tell us truly what was in them. We thought the treaty was to remove the forts and for us to cease from fighting. But they wanted to send us traders on the Missouri, but we wanted traders where we were. When I reached Washington, the Great Father explained to me that the interpreters had deceived me. All I want is right and just.

Whose voice was first sounded on this land? The voice of the red people who had but bows, and arrows….What has been done in my country I did not want, did not ask for it; white people going through my country…. When the white man comes in my country he leaves a trail of blood behind him….I have two mountains in that country…. The Black Hills and the Big Horn Mountain. I want the great father to make no roads through them. I have told these things three times; now I have come here to tell them the fourth time.

“The Great Spirit raised both the white man and the Indian. I think he raised the Indian first. He raised me in this land, it belongs to me. The white man was raised over the great waters, and his land is over there. Since they crossed the sea, I have given them room. There are now white people all about me. I have but a small spot of land left. The Great Spirit told me to keep it.”