On January 1, 1913 the U. S. Post Office began parcel post service for shipping packages throughout the country. Pretty much anything could be mailed that wasn’t dangerous or pose a threat to other pieces of mail.

The new service took right off – almost two million packages were shipped the first week of operations alone. A mortuary in St. Louis mailed human ashes to Illinois for burial, while a mother in St. Paul, Indiana sent lunch to her 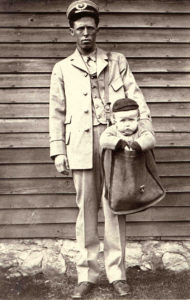 son who worked in Indianapolis. There were a few snags: a package of skunk hides prompted the evacuation of the post office in Decatur, Illinois.

Pretty soon requests began to be come in with special requests. Within two weeks a letter from Fort McPherson, Ga to the Postmaster General requested: “Sir: I have been corresponding with a party in Pa., about getting a baby to raise (our home being without one). May I ask you what specifications to use in wrapping so it (baby) would comply with regulations and be allowed shipment by parcel post as the express company are too rough in handling?”

On January 22 a woman requested rates for mailing herself from Elgin, Illinois to Washington, D.C.

On January 31 in Batavia, Ohio a baby was actually sent by parcel post. A baby boy, weighing 10 3/4 pounds, was delivered safely by the local carrier to the address of its grandmother, Mrs. Louis Beagle, who lived about a mile from its home. The postage was 15 cents and the “parcel” was insured for $50.

On January 27 Mr. and Mrs. J.W. Savis of Pine Hollow, Pennsylvania shipped their daughter via their rural carrier who delivered her safely that afternoon to relatives in Clay Hollow. The shipment cost 45 cents.

In February another baby was mailed from Stratford, Oklahoma to Wellington, Kansas.

In 1914, a mother going through a divorce shipped her baby from Stillwell to its father in South Bend, Indiana. The child traveled in a container marked “Live Baby” for only 17 cents.

A year later a 48-1/2 pound “package” (just under the 50 lb weight limit) was sent in a train’s mail compartment from Grangeville to Lewiston, Idaho. The “package was a four-year old girl named May Pierstorff whose parents “mailed” her to her grandparents with 53 cents (the going rate for mailing chickens) postage attached to her coat.

On June 13, 1920 the headline in the Washington Herald read: “CAN’T MAIL KIDDIES – DANGEROUS ANIMALS”. The Post Office, in its wisdom, had finally ruled that children were not “harmless animals” and because of their potentiality for danger may not be mailed as parcel post. “By no stretch of imagination or language,” said the ruling, “can children be classified as harmless, live animals that do not require food or water.”