In October of 1937, President Franklin Roosevelt toured the Olympic Peninsula from Lake Crescent in Clallam County through Jefferson County to Lake Quinault and the cities of Aberdeen and Hoquiam in Grays Harbor County. When he arrived at Port Angeles a large crowd greeted him including hundreds of school children standing under a sign that read: 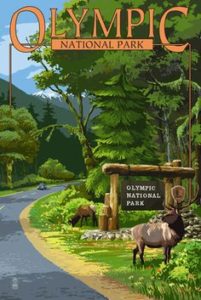 Roosevelt spent the night at Lake Crescent where he discussed the proposed park around his cottage fireside with state and federal officials.  Clouds and driving rain obscured views of the peninsula’s mountains, ocean, and forests for most of the day on October 1, but near Lake Crescent the President and his party viewed a reforestation project where Civilian Conservation Corps workers had planted 2 million trees.

At the Snyder ranger station he watched a fire fighting demonstration that included trains of pack horses loaded with firefighting equipment. Outside Forks, “ace topper” Fred Wilson demonstrated tree topping – practically running up a 250 foot Douglas fir to a point about 195 feet high, where he cut through a notch prepared earlier and brought the top down.

From Forks to the lunch stop at Lake Quinault, where the party was joined by Washington governor Clarence Martin and his son Frank, the road ran largely through virgin forest. South of the lake however, the sun started to emerge from the clouds and exposed miles of raw and ugly clear cuts.  Roosevelt turned to the Congressmen riding with him in the car and said, “I hope the son-of-a-bitch who logged that is roasting in hell”.

When the motorcade reached Aberdeen in the afternoon 50,000 citizens lined the streets, and Roosevelt stopped briefly to speak. By the end of the tour, it was clear that Roosevelt supported creating a large national park on the Olympic Peninsula.