Be it enacted by the Senate and House of Representatives of the United States of America in Congress assembled, That there shall be, and is hereby, granted to the State of California the “cleft” or “gorge” in the granite peak of the Sierra Nevada Mountains, situated in the county of Mariposa, in the State aforesaid, and the headwaters of the Merced River, and known as the Yo-Semite Valley, with its branches or spurs, in estimated length fifteen miles, and in average width one mile back from the main edge of the precipice, on each side of the valley, with the stipulation, nevertheless, that the said State shall accept this grant upon the express conditions that the premises shall be held for public use, resort, and recreation; shall be inalienable for all time; but leases not exceeding ten years may be granted for portions of said premises 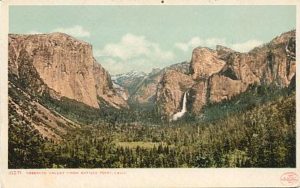